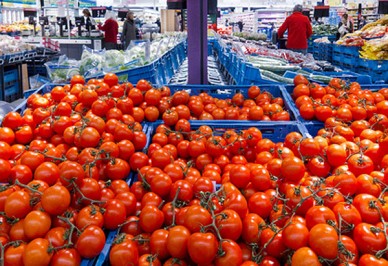 As much as half of all food produced around the globe is believed to be wasted and if this shocking fact isn’t enough by itself, one of the main reasons behind this is it failing to meet the required appearance standards set out by supermarkets. Despite the fact that a recent survey conducted by the Institution of Mechanical Engineers showed 80% of British people would still buy produce that wasn’t a uniform shape or colour, supermarkets still feel the need to enhance the look of the food on their shelves. Even once they have purchased the “perfect” produce from their suppliers, careful use of lighting and packaging is employed in store to make their fresh produce look more appealing, but how flavoursome, fresh and nutritious is it really? Here we take a look at this issue and contrast it to produce grown on a small-scale and available locally.

The matter of flavour

While fruit and vegetables in supermarkets may have been selected for their looks, their taste is often lacking. Supermarket tomatoes are a prime example of this; you don’t get the sweet and intense flavour their bright red appearance would suggest. By selecting those tomatoes that ripen evenly and at the same time, this inadvertently means selecting those in which there is reduced photosynthesis and as a result less sugar is produced within the fruits; a completely different story to those available from a small local grower. Equally, refrigerating fresh items might help to extend their shelf life in the supermarket, allowing produce to maintain their appearance for as long as possible, but it does nothing for the taste of cold-sensitive items such as tomatoes, plums, peaches and pears. While supermarkets might not be able to use flavour enhancers with fresh fruit and vegetables, it’s a different matter for those that are processed; think of the peaches canned in syrup, the tinned sweetcorn with added sugar and salt, and those that make their way into ready meals with all manner of natural and artificial additives. In these instances, the nutritional quality has been taken down a peg or two through the extra additions; it’ true that some of these do act as preservatives, but they also encourage our consumption of sometimes less than flavoursome items owing to the time lapsed since they were harvested.

Research indicates that there is a lower content of phytonutrients in farmed produce than that found in the wild – these are the plant nutrients believed to protect against the likes of heart disease, cancer and dementia – so even if we make the effort to include the correct balance of foods in our diets they may still not be as nutritious as they could be if sourced correctly too. It appears that selecting produce with the best aesthetics has reduced its nutritional profile. On top of this, the practice of supermarkets sourcing much of their fresh produce from outside the UK – just 20% of the tomatoes sold are  for instance – means that fruit and vegetables already depleted in nutrients lose even more during the days or weeks it may take to reach the supermarket shelves after picking owing to the “food miles” they have had to travel. The items available at your local farm shop or from someone with a smallholding may not be perfectly formed on the outside, but what they offer nutritionally can be far greater.

A healthier diet therefore isn’t just about eating more fruit and vegetables, the types you opt for and where they come from are also important considerations. Opting for varieties more akin to wild plants such as scallions and ensuring you obtain these from small-scale local growers – or those that you have grown yourself – can enhance the quality of your diet significantly. Storing your fruit and vegetables correctly once harvested and avoiding overcooking are also vital to minimise loss of nutrients. Considering aspects of your lifestyle can also ensure that the nutrients in the produce you eat can provide maximum benefit. For instance, smokers have higher vitamin C requirements – around twice that of non-smokers – owing to the role of this vitamin in neutralising some of the harmful chemicals in cigarette smoke. By quitting smoking you therefore allow the vitamin C from your diet to be available for its other functions, which include its role in maintaining the health of the skin, bones circulation and immune system.

Produce that packs a greater nutritional punch isn’t the only benefit from supporting smaller local growers or setting aside a patch in your own garden. Knowing where your food comes from is increasingly important to people, which is a given when buying directly from the grower. Organic farming is also more widely embraced by small-scale growers, providing peace of mind for those wishing to avoid residues from pesticides on their produce; this also appeals to environmentally conscious shoppers as well. In a time when the supermarkets are stocked with so many processed items – and even the fresh produce may be artificially enhanced – there is something reassuring about being able to source your food direct from growers providing substance over style as opposed to the other way around.