By Mark Hajdukiewicz on 6th July, 2013, filed in Features, Food 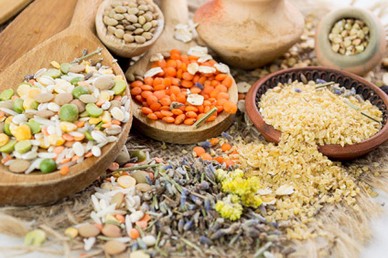 Often credited as a Far Eastern regime, the word ‘macrobiotics’ was first mentioned in the writings of Hippocrates where he used the term to describe people who were healthy and long lived. Followers believe that food that is eaten directly affects health, well-being and happiness.

A macrobiotic (meaning ‘long’ or ‘big’ ‘life’) diet is actually a lifestyle choice that, in its strictest form, can involve eating little more than brown rice and water. Unsurprisingly, this extreme form has been linked to nutritional deficiencies and more commonly today a macrobiotic diet will consist of 40 to 60 percent whole grains, 20 to 30 percent locally grown and organic vegetables, five to ten percent soups (miso), five to ten percent beans/legumes, five percent sea vegetables and five percent other more traditional or naturally processed foods. Fish/seafood, nuts, seeds, seasonings and fruit may also be included in limited amounts.

The emphasis for modern macrobiotics is on a more balanced approach. The Japanese talk of this in terms of yin and yang which are the opposing forces they believe effect all aspects of our lives. Whole grains such as brown rice, millet, rye and buckwheat are the closest to being in balance or neutral which is why they make up the bulk of the intake.

While nothing should be considered completely out of bounds, animal products such as red meat, eggs, poultry and dairy are considered extremely yang whereas refined sugars, chocolate, honey, coffee, coloured tea, alcohol and hot spices are highly yin. These foods as well as refined flour and grains and artificially processed foods are generally consumed only in moderation or avoided completely to avoid yo-yoing between the extremes.

A lot of importance is also attached to the way food is cooked. For example, roasting and smoking intensifies the ‘energy’ in food and is more suited to the winter months but for spring or summer stir frying or blanching produces a lighter, more airy, energy – all fairly obvious really when you think about. Followers of a macrobiotic diet will always cook their own food as opposed to using pre-prepared food.

There are general aspects of a macrobiotic diet which many of you may already be following, especially if you have a vegetable plot or allotment of your own. These include eating local organic produce, eating foods according to the season, chewing food thoroughly and not over-eating. The idea of a wholefood diet is to achieve a state of feeling nourished as opposed to just full and to head toward a more alkaline blood PH rather than the acidic one that is a feature of our modern dietary habits.

Extreme diet regimes such as brown rice and water only (mentioned earlier) are rarely beneficial and certainly wouldn’t be recommended for certain groups such as children or pregnant women who have special dietary requirements. However a more relaxed approach to macrobiotics is far less restrictive and with a little effort wholefoods can be adopted or incorporated into your usual diet very effectively.

The aim of a macrobiotic lifestyle is to achieve a state of balance in body, mind and emotions and there is a lot of information available if you decide to study it more closely. However, simply following the ethos of eating seasonal, locally grown, organic foods will benefit your health, the environment and the local economy too.

Starting with our slant on the classic Eastern European beetroot soup Borscht, Pocket Farm will be publishing a selection of macrobiotic and wholefood recipes for you to try in the coming weeks. These will contain interesting and unusual ingredients to get to grips with. Give them a try and let us know what you think.

The macrobiotic diet has also been advocated as a cure for cancer, however, while aspects of a macrobiotic diet may be beneficial in the fight against some types of cancer, there is no medical evidence that would support its use as an exclusive means of treatment.