Home » » Growing » Rhubarb: growing and using this most versatile vegetable

Rhubarb: growing and using this most versatile vegetable

By Mark Hajdukiewicz on 12th August, 2014, filed in Growing 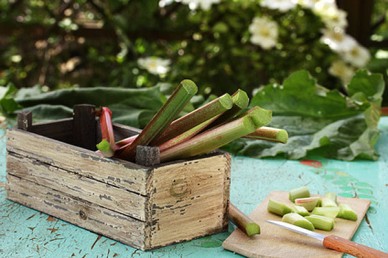 Many plants have multiple uses, such as nettles which we have covered previously, but there are some that are so versatile that they stand out as an almost essential element for any garden or allotment. Rhubarb does indeed make an excellent crumble but, as you will see here, it also provides a toolbox for the gardener or smallholder that makes this one stop shop hard to beat. You’ll find growing tips at the end.

You can eat it

While the leaves are notoriously poisonous the stalks can be used as the main ingredient or an unexpected addition to both sweet and savoury dishes some excellent examples of which you can see here. You can of course also brew it to make a lovely, fresh, pink-tinged or rosé wine.

Yes they are poisonous due to the high level of oxalic acid they contain but this doesn’t stop them being useful. They are a perfectly acceptable addition to any compost heap but if you simmer roughly shredded leaves in enough water to just cover them for about 20-30mins the resultant liquid makes a great insecticide for your non-edible plants. Just add a teaspoon full of washing up liquid to it and spray on to protect against aphids, caterpillars etc. WARNINGS: Do not inhale the fumes when boiling rhubarb leaves as this can be potentially harmful. The pesticide liquid is potent stuff so store safely away from pets and children as it can be very dangerous or even fatal if ingested. 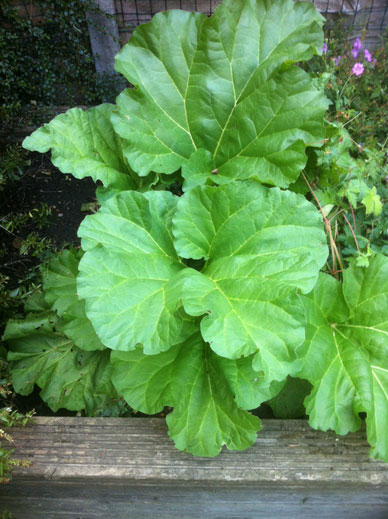 No it’s not the latest alternative to Red Bull but, as you might expect, rhubarb has long been used for its medicinal qualities – almost exclusively as a laxative. A puree of rhubarb, honey, lemon and apple juice is traditional remedy for constipation.

Posh up your pans

Stains on pots an pans can be removed by rubbing directly with the cut end of a piece of rhubarb stalk. Burnt pans may be remedied if you use them to boil down some finely chopped rhubarb in a small amount of water until it reaches a honey like consistency.

The same liquid (without the detergent) as we discussed earlier for use as a pesticide can also be used as mordant for natural dyes. Boil the leaves in a stainless steel or other non-reactive pot for up to two hours, strain the leaves out and then pop your natural fibre in to simmer for another two hours before allowing to cool. The treated fibre can then be dyed using your favourite natural dye including… you guessed it, a yellow/orange colour made by boiling chopped rhubarb root for 30 minutes!

Dye your hair with it

As your hair is a natural fibre it too can be dyed with root liquor which is especially effective for lightening light-brown or blond tones. There are several recipes for rhubarb hair dye on the net but this one is simple and is accompanied by some other natural colourant ideas.

Finally, some of the more unusual uses we have seen for rhubarb. You could use the leaves as a mould for a decorative birdbath – the videos and tutorial here explains the method and it does actually look rather effective. Rhubarb fibre is also an attractive addition to handmade papers and on a hot sunny day, if you can find a full grown plant, you can pull a stem with the leaf still attached for a handy natural parasol.

Tips for growing your own rhubarb

Okay, so now you are keen to grow your own crop of this multi-talented vegetable how do you go about it?

Rhubarb will grow best in a sunny location. Make sure the soil is well drained and has plenty of organic matter added to at least 18 inches deep before planting. Apart from the obligatory weed removal this is pretty all you need to do in the way of preparation as rhubarb is extremely tolerant and robust and will grow with little or no attention producing a crop for many years. 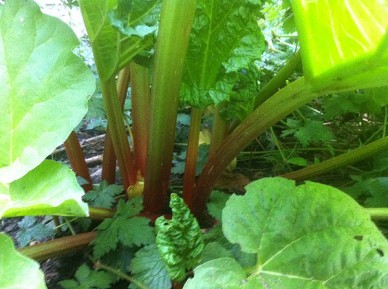 Although you can grow plants from seed it is more usual to use crowns or a section of divided crown to speed up the process. Crowns will produce harvestable crop after a year and divided sections will be ready in two. New plants should not be cropped in the first year and then only lightly in year two to help them establish. In any case try not to take more than half the stems in a season.

To divide a crown select a healthy looking plant and lift the root around November time (although you can do this anytime over winter as long as the ground is soft) then simply split it into three or four pieces ensuring that each has a growing bud. Replant immediately if possible.

I have had good results just letting remaining leaves and stalks die back to create their own mulch in the autumn but the accepted wisdom is cut these away to expose the buds to the cold.

You can plant crowns from October to early spring as long as the ground isn’t frozen. Plant them with the growing points level with the surface or slightly proud if it is wet as crowns are prone to rotting if covered with moist soil. They are large plants so leave approximately 3 feet of space between rows.

Early cultivars will start to produce stems from March or April and continue through to the end of July and beyond. During the season make sure that the soil doesn’t completely dry out and feel free to surround the growing base with a mulch again being careful not to cover the crown to avoid rotting. Very hot weather will often slow or stop growth entirely.

You may also have heard of a technique called forcing. This is where the crowns are covered with a layer of straw and then a bucket or bin to exclude light. Doing this in December or January produces an early crop of thinner, pinker stems. Much commercial rhubarb is produced in this manner but I would recommend being patient and waiting for nature to take its course for a much stronger, longer lasting plant.