Improve your soil with green manure

By Mark Hajdukiewicz on 17th September, 2014, filed in Growing 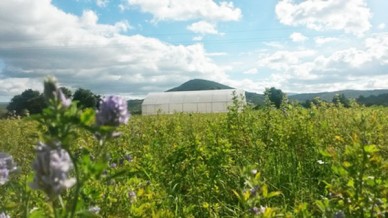 Green manures are a great way to improve the condition and nutrients in your soil as well as protecting it from weed growth or elemental erosion in the winter.

I plant a big patch of lucerne (also known as alfalfa) which is a perennial and also a legume. Used as green manure it should be cut before it flowers so it retains more of its nutrients, it can then be dug in or left as mulch. Alfalfa is a great all round compost and also useful as fodder for pigs and goats so it makes for a great multi-purpose crop.

There are many other plants that can be used as green manures and the one you choose is largely dictated by your soil type and when during the year you wish to use them.

Some of the most popular varieties include:

Caliente mustard – Good for heavy soils over winter. When chopped up and dug in it releases gasses that have biofumigant properties which can help remove disease and undesirable microbes from the soil. Lots of foliage means a good volume of organic matter can be added easily to the soil but being a brassica it is best to avoid planting other plants from this group such as cabbage or broccoli immediately following a mustard crop as this could encourage the disease club root.

Clover – several different varieties all produce lots of foliage and some such as sweet clover can be used on poor soils including both compacted and waterlogged areas.

Phacelia – quick growing, good weed suppressant with the bonus of pretty flowers. Can be dug in after 2-3 months during the summer

In a particularly overgrown area you could even use the annual weeds as green manures in preparation for cultivation. Cut them down when they’re lush and green before they seed because at this stage they have more nutrients. Some people even use sunflowers as a green manure, they’re quick growing and make a good bulky amount of foliage. Cut them when they start to flower.

Sow seeds broadcast (following the supplier’s recommendation for sow rate) or in rows if you expect lots of weed growth, this way you can hoe out weeds between rows until your crop is established. Varieties such as white clover or yellow trefoil can be intersown with existing crops such as soft fruit bushes or sweetcorn respectively.

A word of warning though, when anything rots it needs nitrogen for the chemical process, so it is best to leave at least two weeks between digging in your green manure and planting as it can, ironically, reduce soil fertility until they are fully decomposed. Also lots of lush new vegetation may bolster the local slugs and snail population so prepare to combat their advances too.