Time flies - a brief history of fly tying through the ages 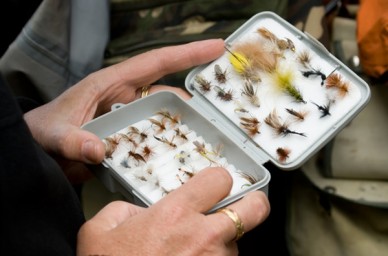 IT IS DIFFICULT TO DETERMINE with any great accuracy when artificial flies were first used to catch fish. The Chinese are said to have used a kingfisher’s feather as a hook bait several thousand years BC. But to use feathers to suggest a winged insect was a more complicated matter, so far as we know the Macedonians were the first to manage it. They used coloured wools for the body of the fly and for the wings mounted two cock’s feathers on the hook taken from a cock’s cape, very much as we do today. There is is the description from about 200AD that describes a Macedonian way of catching speckled skinned fish in a river called the Aestraeus. These fish were said to; ‘feed on a fly peculiar to the country which hovers on the river.’ He goes on to say that the natural fly cannot be attached to a hook, and explains; ‘They fasten red wool round a hook and fix on to the wool two feathers which grow under a cock’s wattle. Then they throw their snare, and the fish, maddened and excited by the colour, come straight at it, thinking by the sight to get a dainty mouthful; when, however,it opens its jaws, it is caught by the hook and enjoys a bitter repast, a captive.’

Modern Pioneers
Moving forward some 1200 years, the first printed book (in English) on Fly Fishing was published in 1496, The Treatyse of Fysshynge Wyth an Angle the author of which was thought to have been local dignitary Dame Juliana Barnes (or Berners) of St Albans, although this is questioned by some historians. With regard to the flies used at this time little is known as in the book the descriptions are sparse, for example: the Dun Fly, the body of dun wool and the wings of the partridge, is all you get.

The modern art of fly dressing can be said to have been given its momentum by Charles Cotton, an aristocrat (1630-1687), who added a section on fly fishing to the fifth edition of Isaak Walton’s seminal work The Compleat Angler. Cotton’s significance was as a fly dresser rather than an angler and he studied in great detail the natural flies of his environment and endeavored to make artificial copies. It should be remembered that at this time the fly lines in use were made of horse hair and did not sink, so all flies were fished on or near the surface. There was no differential between wet and dry flies as there is now, when the term dry fly was used, it merely referred to a fresh fly taken from the wallet.

Natural and artificial flies side by side as in Ronalds’ book

The next major influence was the advancement of tackle design and the introduction of the waxed silk fly line in the 19th century, which allowed for better casting and presentation of the fly. In 1836 Alfred Ronalds, a fisherman and brilliant watercolour artist, published The Fly-Fisher’s Entomology which for the first time showed pictures of the natural fly side by side with the artificial and on the next page full tying instructions. At this time fisherman were convinced, probably because of the methods they used, that trout only fed on flies on or just under the surface. Not until 1910, when George Skues dared to put forward the idea that fish would happily take the nymph (larval) stage of the insect, did attitudes change. He tied and described the tying techniques of many nymph patterns and later became known as “the Father of the Nymph”. This type of tying and fishing was continued by Frank Sawyer, a river keeper whose pheasant tail nymph still forms the basis of many a fly box to this day.

Of course fly fishing is generally associated with salmon and trout but there are, in fact, many other species that can be taken using artificial flies include chub, grayling, carp and pike with more unexpected ones such as roach and bream occasionally persuaded by a particularly convincing pattern. They are even effective for some salt waters species, such as bass, showing their versatility as a lure.

Today there are hundreds of patterns available from the minimalistic buzzers to fully dressed and flamboyant salmon fly designs. Skillfully fashioned from traditional materials such as wool, feather, hair, wire and silk or more contemporary ones including various plastic materials, epoxy resin, chenille and many more, they closely mimic not just flies but beetle larvae, small fry fish, tadpoles, worms, daddy long legs and shrimps.

Fancy a go yourself? In part two of this series we will look at the tools and materials used to create some of the classic patterns. In the meantime if this has whetted your appetite and you would like to find out more about this fascinating pastime you’ll be pleased to know that Hertfordshire has its own, very active, branch of the Fly Dressers Guild that you can contact at www.flydressers-guild-herts-branch.co.uk