Home » » Environment » The plight of the humble (honey) bee

The plight of the humble (honey) bee

By Mark Hajdukiewicz on 17th February, 2013, filed in Environment, Wildlife 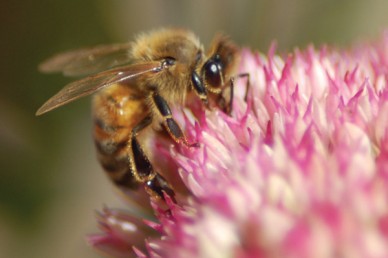 When you consider what they do it’s hard to overplay the role that bees fulfil in our planet’s cycle of life. Here Michael Cook gives us an insight into the current crisis facing the honey bee population and what we can do to overcome it...

Humans and bees lives have always be closely intertwined but never have they been so inextricably linked as they are now.

Of the 250 odd species of bee currently identified in the British Isles only one displays the right combination of colonial living and excessive honey production that make it suitable for domestication and that is the aptly named honey bee.

This industrious and social insect affects our everyday lifestyles in a most profound way. They are a vital component in the world’s food production cycle and through the process of pollination are responsible, directly or indirectly, for up to 70 percent of the food on our shelves. It’s not just honey but all manner of fruits, vegetables, nuts, even cotton and coffee that we can thank them for.

For this reason it has been said that the health of the world is reflected in the health of the bee population and if this is the case we should be concerned. The bee population has decreased dramatically in recent years and the trend looks set to continue unless rapid action is taken.
Factors such as a decline in suitable flowering plants, pesticides, pollution and parasites, such as the ubiquitous Varroa mite, have all had an impact as has the largely unexplained phenomena of colony collapse disorder where a colony’s entire worker bee population will suddenly disappear.

Last year’s wet summer also compounded the problem as bees, unable to fly in the rain, have found it difficult to collect enough food. This in turn affects the wider food chain when the plants that rely on them for pollination produce less.

It’s not just happening here either this is a global phenomena. Such is the problem that there are now few, if any, wild colonies left in this country meaning managed hives are the only way of maintaining the population.

The good news is that we can all do something to help so here are seven suggestions for ways in which you can support your local honey bee population.

1. Buy local honey. Yes it can be that easy. It’s delicious and the proceeds will help support local beekeepers. 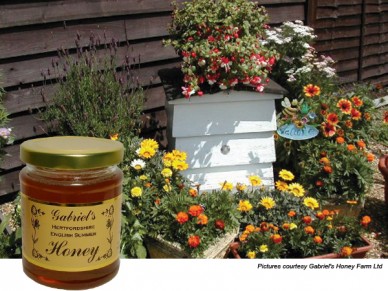 2. Planting for bees. You may have many bee-friendly plants in your garden already as a lot of popular flowers and shrubs such as hollyhocks, sunflowers, asters, hebe, sedum and the ‘butterfly bush’ buddleja are all excellent food sources. Some that you may not be aware of though are vegetables such as peas and beans or flowering herbs such as mint. If you have more space you could consider soft fruit plants or fruit trees such as cherry, apple, pear or plum.

3. Talk to your local authority. Encourage your local council to use more honey bee friendly plants in its public spaces or to establish wildflower meadows where possible.

4. Got a suitable space but don’t want to run a hive yourself?
If you have any spare space that could be used for a hive please contact your local beekeeping association or group as they may be able find a keeper who can put it to good use.

5. Educate about bees. If you run a social group, school or club get a beekeeper along to tell them about these fascinating creatures. Beekeepers are very passionate about their work and are usually more than happy to come along and share their knowledge.

6. Wash your jars. Strange as it may seem supermarket honey from abroad can contain certain bacterias which are extremely harmful to our native honey bees. In these days of increased interest in recycling make sure that any honey jars are thoroughly washed before putting them outside as bees will be attracted to an easy meal and a single bee can spread an infection through an entire colony.

7. Swarms. Contrary to popular belief swarming bees are generally fairly docile. Swarming is simply the process by which bees increase their numbers by forming new colonies. If you spot a swarm, leave well alone but let your local authority or the police know and they will contact a local beekeeper to collect it.

8. A hive of your own. Anyone interested in setting their own hive should contact their local beekeeping association for advice. Most will run introductory courses or allow you to become a beekeepers ‘buddy’ (below) before you commit to your own hive. 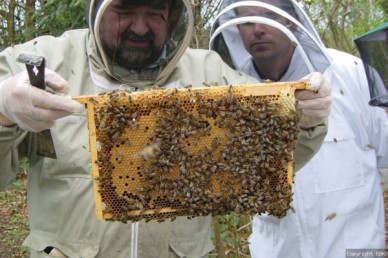 There are seven branches of the Hertfordshire Beekeepers’ Association with around 350 members servicing an estimated 600 hives in the county. Visit www.hertsbees.org.uk or www.bbka.org.uk to find your local branch.