Home » » Crafts » Stickmaking: getting a grip on this traditional craft

Stickmaking: getting a grip on this traditional craft 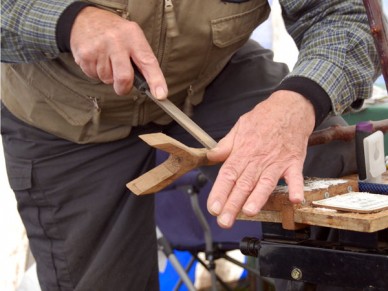 We have been using sticks for support and as weapons for thousands of years. They have also been used as symbols of power and position within society. The tomb of Tutankhamen held a large collection of sticks and staffs many of which were decorated with hieroglyphs and precious stones and he is now considered to be one of the earliest stick collectors.

The origins of the stick or staff can be traced throughout the world as part of the culture and folklore of numerous societies and races but it’s not until their popularity burgeoned in the 18th and 19th centuries that it became a commercialised product. During this time both men and women in high society ‘wore’ sticks and canes as fashion accessories and as a statement of their position. More recently there has been a resurgence in their popularity with a particular emphasis on those with a country bias. This has been supported by an increasing number of large country shows and fairs where there is an ever increasing interest in sticks and the craft of making them. The majority of those making sticks now do so as a hobby with the desire to keep an ancient craft alive and pass on skills and knowledge to the wider public. These aims have been supported since 1984 by the British Stickmakers Guild both in this country and abroad. 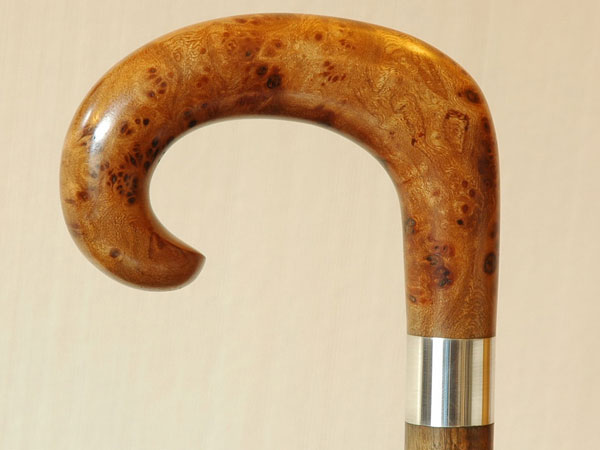 Stickmaking materials can be as varied as an individual demands and one could almost write a book on this aspect alone, however, wood is the most widely used. Most types can be utilised in one way or another for stickmaking but I will confine myself to the most commonly used here. Traditionally hazel, ash, chestnut and blackthorn are the most popular for the shank – the straight piece of a stick not including any handle – as all these are relatively light, with the exception perhaps of blackthorn and are easily found. Holly is also popular but tends to be heavy and can require a lot more work to make it aesthetically pleasing.

I think it is important at this stage to differentiate between sticks that are made for country pursuits and working in the countryside and those used in more urban settings. The materials mentioned above are amongst those that would have been, and still are, available to anyone out in the countryside. Sticks at the height of the fashion era would have been made with more exotic materials such as ebony, rosewood and Malacca. These materials are still available but tend to be expensive and used for more decorative walking sticks and canes. Some adventurous stick makers use even more unusual materials such as Jersey cabbage stalk, elder tree, glass and even stretched and dried bull penis known as pizzle stick. 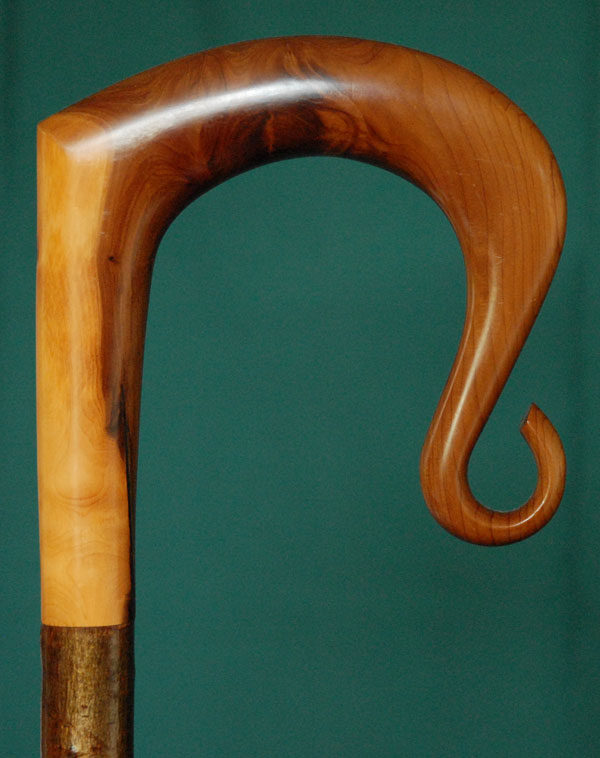 When we think of sticks in this country the most obvious one is probably the shepherd’s crook with its iconic ‘hook’ shape and associations with the country lifestyle. The crook usually has a head made from the horn of a ram – a traditional material going back hundreds of years – and these are still used today. Unfortunately, due to changes in sheep farming methods over the years, sourcing horns of sufficient size and quality is becoming more difficult so today many modern makers use imported black buffalo horn as a substitute. 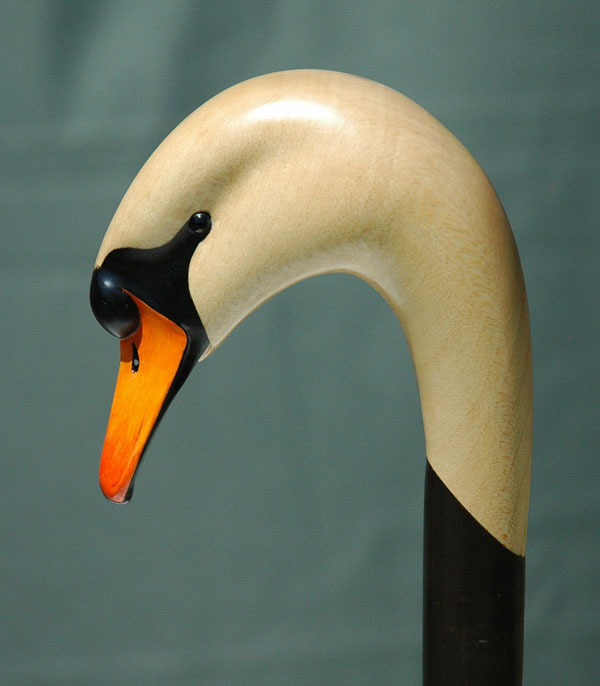 Stick handle designs are limited only by the makers imagination

Wood is also popular for handles and again can range from relatively common species such as elm, yew, sycamore and ash, through to more exotic species like cocobola, ebony, walnut, amboynas and rosewood. Really no material is out of bounds for handles including precious metals, glass, porcelain or even amber. The jeweller Faberge was known for his sticks and handles and they command a high price when they come up for sale occasionally. One of the materials often found on older stick handles is ivory and this can come from a variety of sources whether it be elephant, walrus, hippopotamus or marine ivory. Raw ivory from elephants is virtually unobtainable legally nowadays and even old ivory cannot be re-worked or carved.

All of the common materials mentioned above can be used for a variety of applications and it is more often than not up to the person making or using the stick to decide what they want. As I have already mentioned, some woods are denser than others and therefore weigh more and this might be a factor to be considered. However a well balanced stick made from a denser wood may feel lighter in the hand than an unbalanced stick made from a lighter wood.

Shank woods can be relatively easily obtained from woodlands and hedgerows and sometimes even the garden. The important thing to remember is that if you intend to cut your own shanks then you need to get the permission of the landowner. It is generally accepted that the best time to cut shanks is during the winter months December – February but bear in mind that whenever you cut it it will be 12 months, while it dries or seasons, before you can use it. The rule of thumb is that you season wood for 12 months for every inch of thickness. If you can’t wait then help is at hand from a number of suppliers of ready seasoned shanks both on the internet and also at various game fairs and country fairs.

Woods for handles, both common and exotic, are available from suppliers of wood turning materials and also on the internet. Rams horn, buffalo and antler can be obtained through specialist stickmaking suppliers or again from some country and game fairs. However, it is very satisfying to make a stick from a shank you have cut yourself. 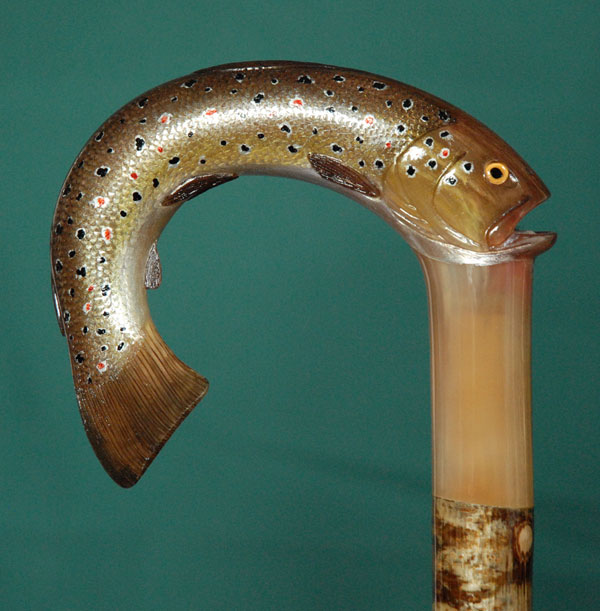 Handle featuring a trout carved from a Ram’s horn

All the common woods and horns mentioned in this article can be used in their raw state, that is they do not have to be finished with any particular products. However, in order to enhance the look of the materials you are using and to protect them from the elements they will benefit from a finish of some description. In the case of woods this might be the use of a good outdoor varnish or various oil finishes such as Danish oil, boiled Linseed oil, Tung oil and gun stock oil. You can also use various nut oils including walnut and hazel. Varnishes give a totally weatherproof finish whereas oils will require re-applying from time to time, they do however give a more natural look and feel. Antler and horn can be simply waxed, polished and buffed to a high gloss finish with a good quality polish. Note: Although some people do varnish horn and antler I personally think this is unnecessary.

There are numerous ways to make a stick depending on whether you are using wood, horn or antler. The simplest stick in many respects is a one piece stick that has the shank and handle all cut from the same branch. More often, however, a stick is made from two pieces the handle and the shank which are joined together and here I will explain briefly the process of making a two piece wooden stick with wooden handle – working horn is well beyond the brief of this article.

Having decided on the shank you want to use the fist thing you are probably going to want to do is straighten any slight bends in the wood. This can be done by heating the bend gently with a hot air gun, keep the air gun moving so as not to scorch the bark until the area is hot to the touch. You should now be able to carefully pull the shank in the opposite direction to the bend against your knee*. Repeat with all the bends or until you are satisfied with your shank. A piece of 8mm threaded bar (obtainable from most DIY stores) is used to join the shank to the handle so you need to drill a hole approximately 3 inches into the centre of the shank, making sure the hole is straight and does not go off at an angle. 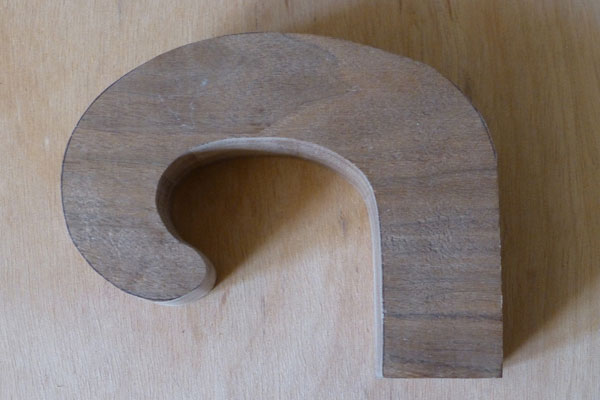 Your handle shape profile can now be cut using a fret saw, coping saw or bandsaw. The grain of your wood should run along the top of the handle. Mark a centre line around the blank and always work to this line, redrawing it if necessary. 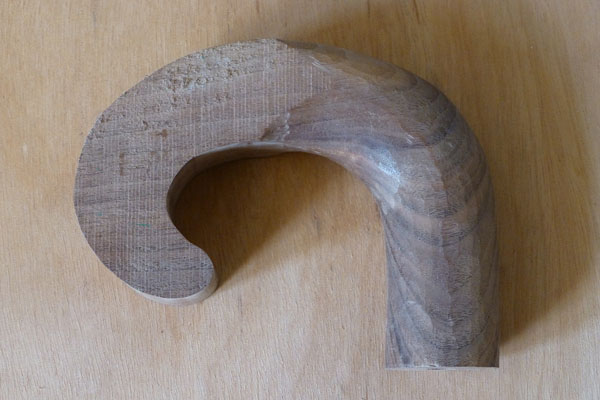 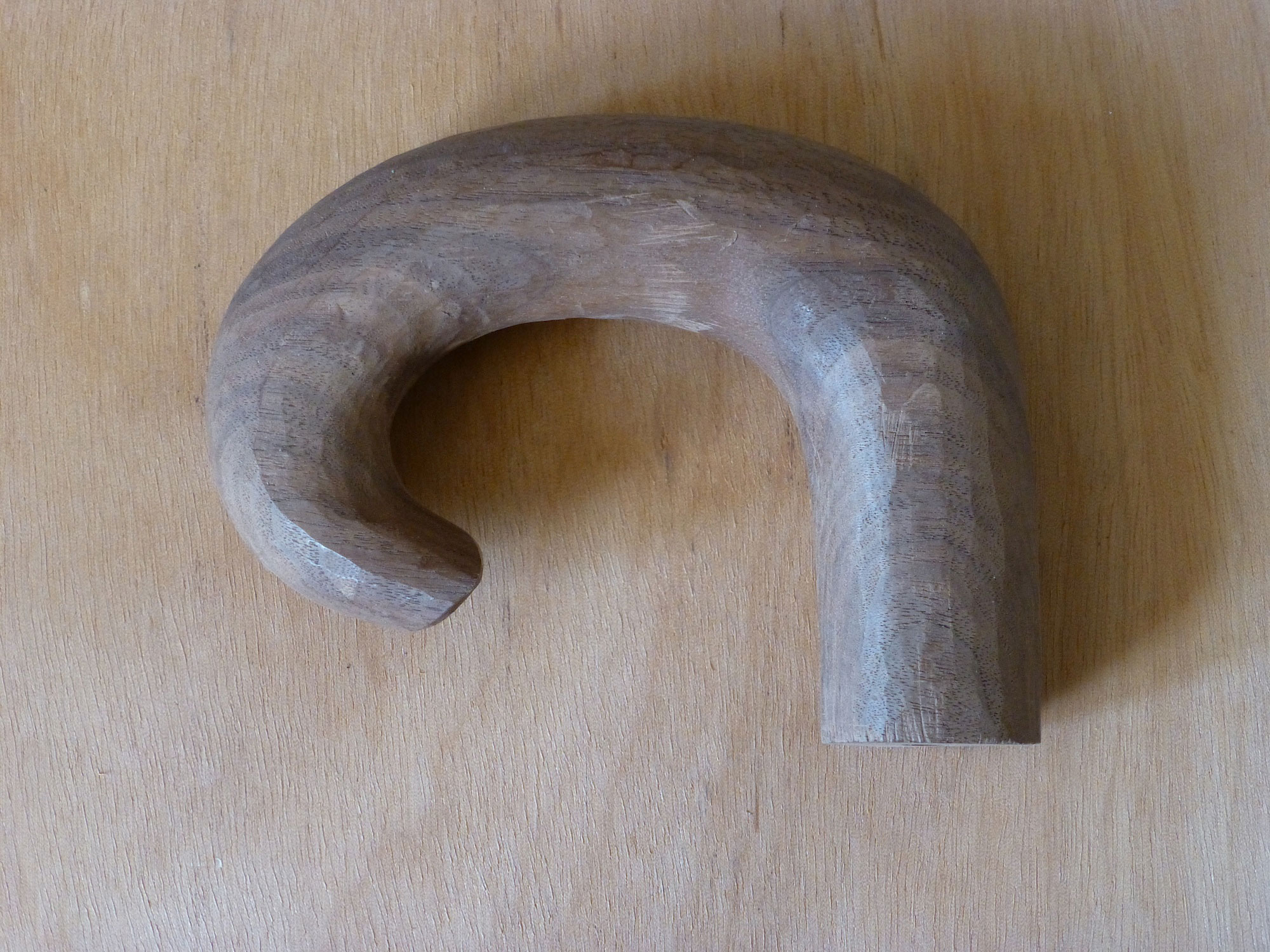 Try not to leave any flat spots as they will be uncomfortable to hold. Drill a similar hole in the handle to the one in the shank, although maybe not quite as deep. Cut a piece of 8mm threaded bar to the appropriate length to fit into the shank and the handle. 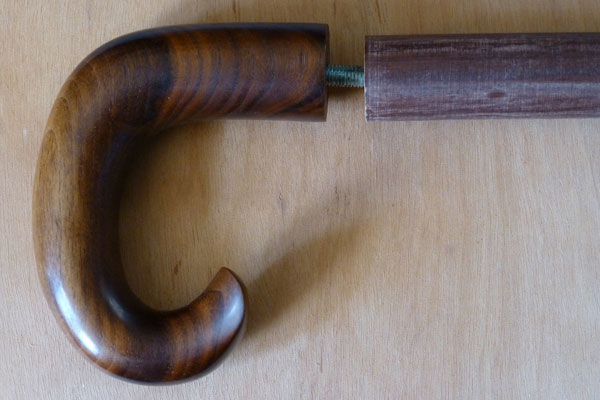 Dry fit everything together and ensure there is a good joint between the handle and shank. Adjust by filing each surface until you cannot see light between the joint. File a small flat along one side of the threaded bar. Mix up a two part epoxy adhesive eg. Araldite or similar, I use the rapid variety, and apply to the bar and the holes. Use enough adhesive so that it squeezes out between the joint , it can be cleaned off with a sharp knife before it is completely dry. Hold or clamp the two pieces together until they are set then leave for 24 hours to harden thoroughly. 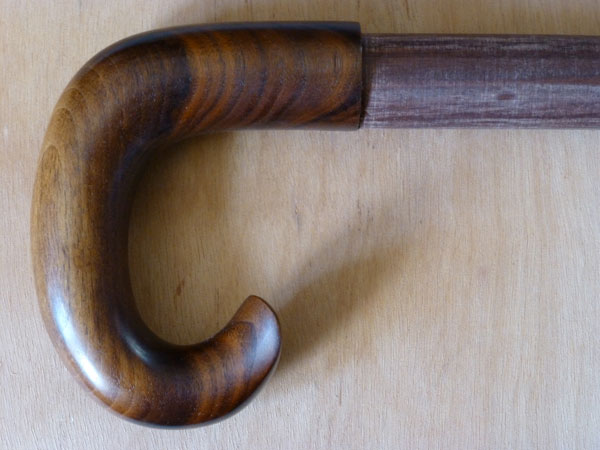 Handle and shank glued together. Note: you would usually fix the handle to the shaft and finish the fitting before polishing

Finish the handle so that it fits neatly with the shank and sand it to the finish you require. Varnish, oil or wax as the feeling takes you. Add a ferrule if you want to, either metal or rubber and enjoy your stick. If you feel like having a go and want more information then I recommend a book by Andrew Jones and Clive George entitled Stick Making a Complete Course published by the Guild of Master Craftsman.

There are approximately 2000 members of the British Stickmakers Guild both in this country and abroad. There are also a number of local groups around the country that hold regular meetings and shows. As a member of the Guild members receive a quarterly magazine with information and articles from members relating to stick making and collecting. There are also numerous shows and competitions around the country with a UK Novice Stick Championship for those who are just getting started to the UK National Stick Championship. For more information go to thebsg.org.uk or you can contact your local group: Sticks in Bedfordshire, Dr Nick Murray, 01582 594546, or e-mail: Dr.nicol.murray@ntlworld.com 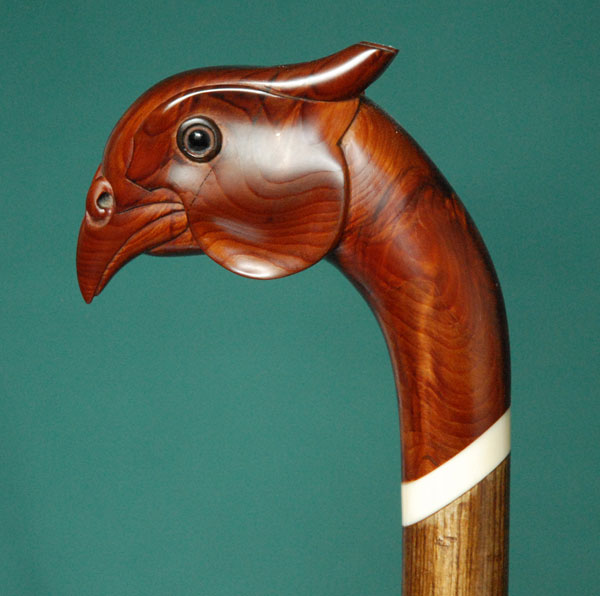 All the sticks used to illustrate this article (except Ram’s Horn Trout by D.Davies) are the work of David James who is also editor of The Stickmaker a quarterly magazine distributed to members of the British Stickmakers Guild

*If you have knee problems do not use this method and you should stop if you feel the slightest pain in your knee.