By Mark Hajdukiewicz on 22nd May, 2014, filed in Features 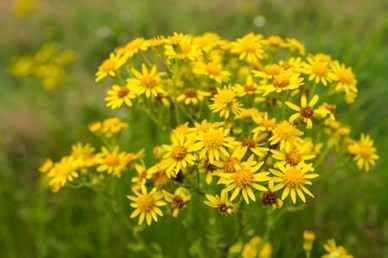 A lot has been written about ragwort over the years and there is no doubt that this plant can be dangerous to your animals if ingested in significant amounts. The question, though, should perhaps be what constitutes ‘significant’ and is the threat posed by this plant worthy of the often near hysteria that it often induces.

I think most of us are aware of the reputation of ragwort as a silent killer that lurks in the paddock ready to kill any horse, goat or pig unfortunate enough to take a nibble. However, the fact is that the amount of ragwort that needs to be ingested to induce irreversible liver damage – the main consequence of ragwort poisoning – is often much higher than you might imagine. Horses and cattle, for example, need to consume somewhere between 5% and 25% of their body weight for effects to be fatal, for goats it can be as much as 400%.

This reputation has permeated deeply and it is not unusual even for councils to misinterpret the law pertaining to this plant and react inappropriately.

The 1959 Weeds Act actually states that:

“(1) Where the Minister of Agriculture Fish and Food (in this act referred to as ‘the Minister’) is satisfied that there are injurious weeds to which this act applies growing upon any land he may serve upon the occupier of the land a notice, to take such action as may be necessary to prevent the weeds from spreading.”

There is nothing in law that actually states you must automatically eradicate this weed from your land, although you may be required to should it become a problem. It doesn’t help that in some legal texts it is described as an injurious weed – this phrase comes from the Latin meaning ‘wrongful’ and actually refers to a ‘detrimental effect on agriculture’, not to its toxicity.

The danger in ragwort comes from the pyrrolizidine alkaloids it contains which, while harmless inside the living plant, when digested and broken down by the liver become toxic. Ragwort is not toxic to humans though handling and is not a food plant so poisoning via ingestion would be very unusual. It is good to remember that there are other flowering plants, notably borage, comfrey and common groundsel that also contain these alkaloids – in fact the figure is almost 3% of flowering plants worldwide.

Unless you have a large patch in your livestock field the dangers are likely to be minimal especially considering that the fresh plant has quite an unpleasant and bitter taste that most animals will avoid. A more likely source of ingestion may be when it is found dried in hay as it is much more palatable in this state.

This is not to say that poisoning doesn’t happen – it does. If you have animals in a field where ragwort is present you would be well advised to take steps to avoid the chance of ingestion as far as possible.

To control an infestation cutting or pulling the plant out might be your first reaction but this can often lead to a greater problem later on. Pulling is likely to leave root fragments that can each return as individual plants. Cutting stops them setting seed which is, in fact, what kills the plant off. The most effective way to rid your land of ragwort is to enclose the infested area with rabbit proof fencing and let it set seed. This kills the plant and if the ground is generally undisturbed by animal activity – especially the scratching of rabbits – the seeds are unlikely to germinate.

Do bear in mind that ragwort does also have its own important role to play in the environment too. A common pollen producing plant it it vital to a number of eco systems and there are as many as 30 species of invertebrate that are totally dependant on it for food.

Perhaps the best advice if you find ragwort on your land is to consider the options, act accordingly, keep calm and carry on.