By Pat Mercer on 23rd April, 2013, filed in Livestock, Sheep and Goats 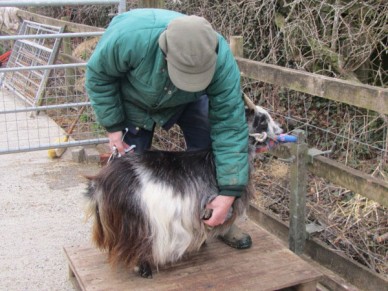 Having considered the provision of an appropriate environment for pygmy goats, we must next think about essential routine tasks before going on to nutrition and more specific health matters. It goes without saying that all of these factors work together in order to achieve optimum health.

For many years the accepted practice has been to worm goats at set intervals, regardless of their circumstances. Nowadays, this is no longer the case and goat keepers are more aware of the many factors that have to be taken into account before deciding on what would be the most efficient routine for their particular herd.

What determines the most appropriate routine?
Firstly, let us consider how worms can be controlled. They can be controlled either by the use of anthelmintics (wormers), pasture management, or using alternative forages.

The use of anthelmintics
They can be utilised in three ways:
Routine drenching
Strategic drenching
Salvage drenching

Routine drenching has been adopted, without questioning the practice, for many years by most goat keepers. As there is now an accepted problem of resistance against one or perhaps more of the wormers used, the second alternative, namely strategic worming, is recommended by most vets.

Strategic drenching is based on faecal egg count (FEC). It involves sending off a faecal sample at intervals for analysis. This can be done as individual samples or as ‘mob samples’ i.e. a joint sample of a group of goats. The former is better than the latter as the worm burden of each goat can be determined, but when dealing with large numbers, then ‘mob samples’ would be far cheaper and will give you an overall picture of contamination.
FEC Results (Dr. B. McLean ADAS)
Low <300 eggs per gram Medium 301-600 epg High >600 epg

After analysis, a test result sheet is sent out with a clear account of the findings. It also gives an indication of the level of coccidia present with a recommendation of further action on both counts.

A consultation with your vet. or a specialist group such as Abbey Diagnostics on the appropriate use of FEC would be well worth doing.

Strategic drenching ensures that your goats will only be wormed when necessary.

Salvage drenching is when animals are drenched only when they show symptoms of carrying a heavy worm burden. Not a strategy generally recommended.

The type of wormer group should be changed annually.
N.B. No wormer is licensed for goats.

Remember that the minimum number of anthelmintic treatments should be used – only treat when necessary. Animals need to be weighed to determine the correct dosage. If in doubt always consult your vet.

The best practice would be to combine FEC with pasture management. For example two acres, divided into two areas with each area rotated annually would be ideal for about six goats. Rotation of three paddocks would of course be better.

Sheep should not be kept in the same area as goats as they share the same worm burden. On the other hand, land grazed behind the goats by cattle or horses would be of benefit as they ‘hoover up’ the goats’ worms. If rotation is not possible and grazing limited, it may well prove that routine drenching could be the only valid alternative.

Alternative Forage
Some goat keepers, either because they seek to avoid worm contamination or because their have only limited facilities, choose to zero graze their goats, feeding them alternative forages and keeping them virtually on hard standing all of the time. Alternative forages such as hay, Alfa A, other Dengie preparations, Readygrass etc. can be offered.

Note on new arrivals to the herd
When introducing different goats to your herd it is advisable, having wormed them, to keep them apart for at least the first 48 hours, on hard standing. This will avoid the possible introduction of further worm contamination.

Most anthelmintics come in the form of a drench but if there is also a problem with external parasites, your vet could recommend injecting with
a certain product that is effective against both the internal or external variety. Seek veterinary advice on which medication would be the most appropriate for the needs of your herd.

This is the second and a most important task. Goats need to be routinely vaccinated against enterotoxaemia caused by clostridium perfringens types B, C, D and also tetanus. Other clostridial diseases are rare in this country and are generally not a problem for goat keepers. The broad spectrum vaccines on the market for sheep (heptovac or heptovacP etc.) are not required for goats and if used, add an unnecessary strain on their immune system. Lambivac is the vaccine of choice.

Dosage: 2ml injected subcutaneously with a booster after 4 weeks when the vaccine is first introduced. A goat does not hold antibody for as long a period a time as sheep and will, therefore, require vaccination every six months thereafter.

Young kids whose mother has not been vaccinated beforehand would need to start the programme at four weeks of age but if its mother has already been vaccinated, then there is no need to start vaccination until the kid is eight weeks of age. Whenever introduced, there should be a ‘booster’ injection four weeks after the first one. After injecting, rub the spot gently to disperse the vaccine and to avoid the formation of a lumpy swelling. However, despite the best of intentions, this does sometimes happen and is nothing really to worry about.

Lambivac must be kept in the fridge until required. Do not keep it against the walls of the fridge and certainly not in the freezer compartment as either action would result in the vaccine losing its potency, as would leaving it outside in the sunlight or on the kitchen shelf. Once the pack is open it needs to be used on the same day. It cannot be put back in the fridge and used again for the ‘booster’ four weeks later. Another pack will be required for this. Wasteful, perhaps but essential as:

“…the aspiration of air back into the pack through the puncture can lead to contamination of the contents. Such contamination can then cause abcesses and severe local reactions: or the contamination in the bottle grows, for a while but then runs out of nutrient substrate. The bacteria then die liberating endotoxins which are particularly toxic to goats causing severe reactions and possibly death within twenty minutes” (S.E.G Smith MRCVS Hoechst Ltd.)

Should any goat keeper already have started using Heptovac there is no need to give a ‘booster’ of Lambivac to the whole herd when transferring to the different vaccine. Remember that Lambivac has to be administered every six months thereafter.

Siting of the injection
Injection is recommended into the loose skin along the side of the neck. Gently lift the skin away from the muscle mass and inject at a slight angle along the underneath of the skin, not at right angles directly into the muscle. Rub the site gently after injecting. Turn the goat’s head towards the injection site thus aiding the loosening of the skin on the neck. If someone is holding the goat for the injector, then ensure that it is held firmly and securely and not stressed out by an over fussy or panic stricken handler. This especially applies when dealing with young kids as they need to be confidently and calmly dealt with.

It would be best to get some instruction on injecting your goats before undertaking it yourself as a practical demonstration will always be easier to follow that written instructions. As always, if you would prefer not carry out the procedure then you should enlist the help of another experienced keeper or your vet.

Most novice goat keepers live in fear and trepidation of hoof trimming, which is understandable especially when trying to determine how much of the heel to trim. I would strongly recommend, before trying hoof trimming for the first time, to do so under the supervision of a more experienced person. If this is not feasible, then at the very least ask for a demonstration by the person who sold you your goats. It is surprising how quickly the task is mastered.

The first thing is to make sure that you use the correct equipment. The best foot shears to use are the Net-ex lamb shears. There are now a couple of different models available, each being suitable. 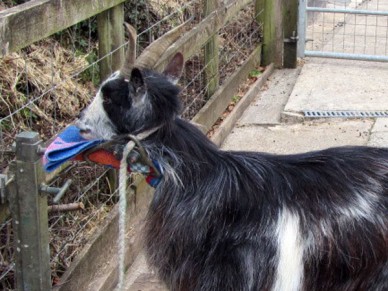 Ready to start trimming: Goat securely held in a headgate

See that the goat is securely tied/held. Reassure your animal, handle it firmly but gently and take time. It can be tied up on a short lead, put into a headgate if available or held firmly by another helper. Little kids, especially, need to be reassured and handled carefully. 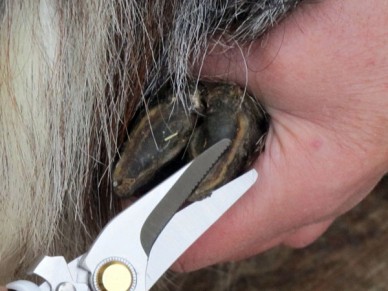 Once in position, after clearing away any mud around the hoof or in the hoof itself, start by trimming the outer nail. Don’t take too much off at a time. Patience is so important, so please do not rush as that is when too much is taken away in a single manoeuvre. 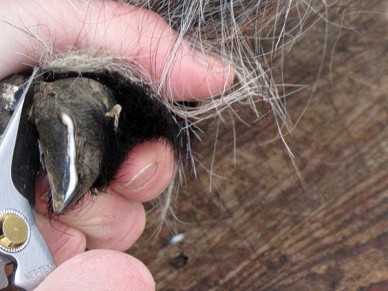 Once the nail area is trimmed, start on the heel. Cut away gradually, ending up with the heel flat and even. A small rasp, passed over the surface at the end of the task helps to level the whole thing off, including the nail areas. 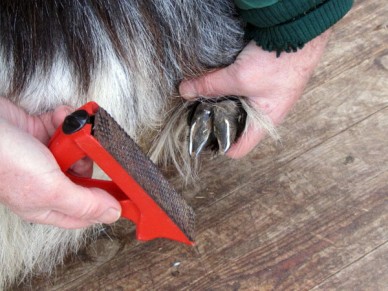 A rasp can be used to tidy the hoof after trimming 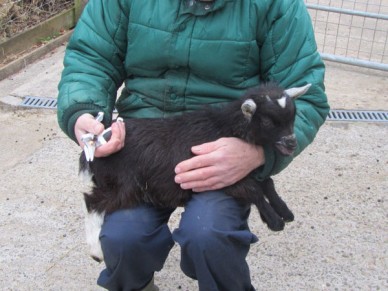 Young kids are probably best held by another person either with them standing four square on the floor and each leg trimmed in sequence, as with an older goat, or sat on the lap of a friend. Quite a firm hand is necessary by the holder, whatever position is adopted.

It is always advisable to have an antibiotic spray at hand in case of accidents. A bleeding hoof usually looks worse than it really is if the shears slip, so try not to panic.