By Antony Barrett on 1st May, 2014, filed in Growers' Yearbook, Growing 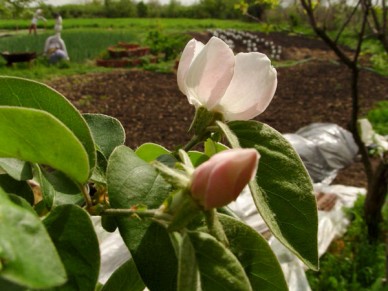 May is a busy and beautiful month in the garden or at the allotment, the bees are out collecting sweet nectar, the peas and beans are getting bigger, the birds are tweeting and the sun’s shining. It’s a real pleasure to be out in the vegetable plot. There is lots of planting, transplanting and tons of weeding to be done. Successional planting is a must to ensure a fresh supply of peas, lettuce, French beans and radishes. These short lived plants should be sown little and often.

During May I’ll be out making hay for the goats’ winter feed. It is best if you can cut before the seeds form as at this stage there is much more protein in the grass. Hay making is very weather dependent – you want a fairly long stint of warm dry weather, if it rains you’ll need to keep turning it until it dries.

Now more about the three sisters companion planting technique. It’s a native American method of companion planting which involves stacked planting. The lower level is full of pumpkin and squash which act as a weed suppressant and mulch. Sweet corn or maze is grown to work as a cane for the beans and the beans add nitrogen to the soil for the benefit of all three. As I mentioned last month, I’m using my three sisters patch for both summer fresh consumption and for dried winter consumption. 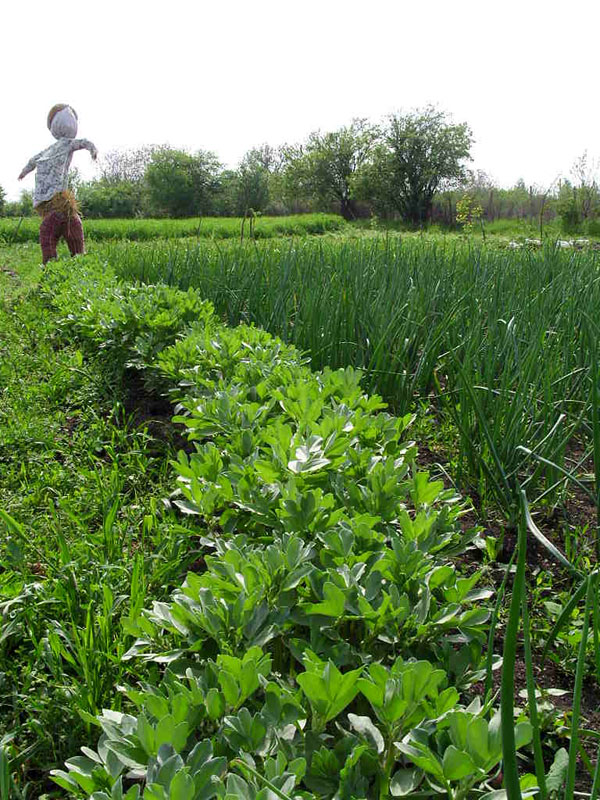 It sounds complicated when written down but it’s simply like a checkers board, you alternate between sweet corn with beans and squash plants. I’m planting maize in the centre row for dry animal feed and our sweetest, tastiest corn on the outer rows so I can harvest them without disturbing the squash which will be smothering the floor. I will leave the maze and beans in the centre row to ripen until fully dry and then harvest for winter storage.

What to do in the garden

Complete summer pruning of peach trees.
Harden off tomatoes and celeriac then plant out towards the end of the month.
Mulch globe artichoke and sea kale.
Start your three sisters bed.
Put some sticks up for your runner beans.
Keep on top of the weeding.

French beans 45cm (18″) between rows, 20 cm (9″) between plants and 5cm (2″) deep. I love French beans they produce loads and you don’t have to faff about with all the canes like you do with runner beans.

Runner beans are great croppers but it is a big job finding all those sticks and making frames for them to climb up. I’m really hoping the three sisters bed works well. If you’re planting them on their own you want to space them 20cm (9″) apart in double rows 1.5m (3″) apart and 5cm (2″) deep. All beans and peas like a good sprinkle of potash (ash from a wood fire).

Beetroot is one of my favourites and is great in salads, roasted in the oven, or pickled for winter use. The sweet earthy flavour is simply great. If you plant a couple of batches a few weeks apart you’ll get a constant supply. Sow them 30cm (1 foot) between rows, 2cm (1″) deep, they should be sown very thinly as each seed contains multiple seeds, one seed every 15cm (6″) or so will be good. You’ll probably need to thin out later.

Sweet corn. There’s not many things as tasty as sweetcorn fresh from the plant. Getting it in the pan quick makes all the difference because as soon as you pick it the sugars start to convert into starch. Plant it after the last possible frosts or 2 weeks before under jars , if you planted indoors be very careful when transplanting because it doesn’t like its roots disturbed. 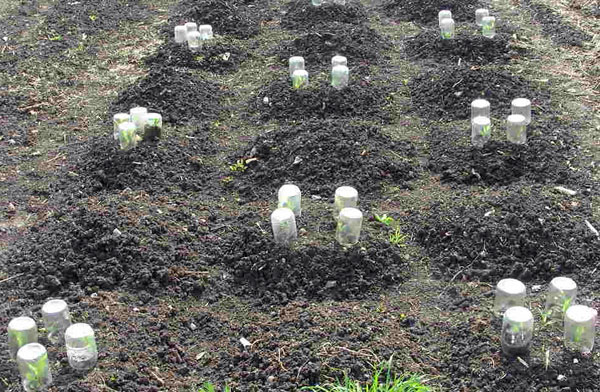 Winter Cabbage can be planted now in a seed bed to go out in mid-summer.

Marrows if picked young are courgettes, you can also eat the flowers. They make an interesting jam and can even be made into a country wine. I only grow a few plants as you will get loads of courgettes from just a couple of plants. Grow them as you do pumpkins and squash.

Peas, I could eat them every day. Plant one batch early in the month and one at the end. I plant them in strips wide enough so I can reach into the centre easily. Plant them 5cm (2″) deep about 8cm (3″) apart. Like all legumes (and brassica) they hate acid soil so add lime if your soil is acidic.

Carrots are lovely, crunchy and sweet. They’re great in salads, roasted, soups, stews, and just plain old raw. They keep well if stored in boxes of sand and left in a cool shed. They like a fine seed bed and if the soil is too rich (recently manured) they are likely to fork. Sow them when the soil is dry and warm as thinly as you can, very shallowly in rows 30cm (12″) apart.

Turnips and swedes can be harvested all summer and autumn, they can also be clamped for winter storage. They make a great fodder crop, in fact before the turnip was imported people would kill off most of their animals before winter as it was very difficult to keep them fed through the winter.  If you get 90cm (35″) of rain a year or more then you’ll want to put them on top of ridges to aid drainage. You can sow them now or any time until August. Sow the seeds shallowly in rows 25cm (9″) apart.

Melons can be planted but need to be kept in a green house for the UK climate.

Pumpkins and squash these take up a lot of room but are worth growing if you have a bit of space. They love rich soil, if you have an old compost heap they do very well just plonked in the top. Last year I planted a lot of different varieties but my favourite had to be butternut squash which tastes beautiful and kept well into February. This year I’m going to also plant some hard skinned varieties to see me through the hunger gap (February to April). This year I’m planting mine in my three sisters bed. If you plant them on their own give them at least 1m (3″) space in each direction. I plant mine two weeks before the last frost under upturned jam jars or plastic bottles cut in half.

Like last month there isn’t much to harvest – you’ll probably have some radishes, lettuce, spring cabbage and if you’re lucky enough to have an asparagus bed you can cut some of that too. Hopefully you’ll have a stock of food in the freezer or otherwise hard skinned pumpkins from last year and lots of jars of preserves. If you have potatoes left you can use these but I planted all my potatoes from last year. 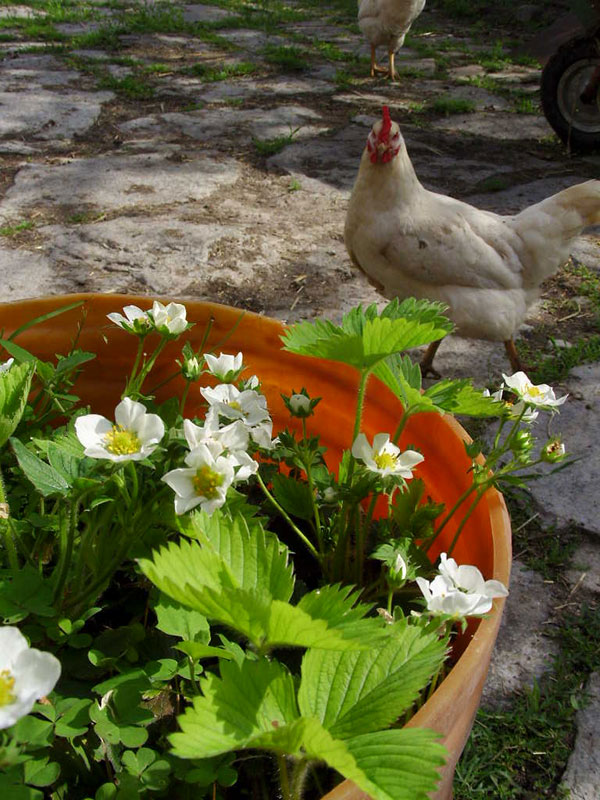