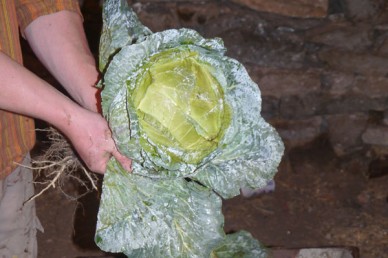 January is a cold month but when the ground starts to thaw out there is plenty to be getting on with in the garden. It’s a time to get excited about the year to come, it’s a time to plan what you’re going to plant this year. It might sound obvious but only grow what you like and if space is limited I’d tend to grow varieties that are hard to come by or things that just don’t taste the same from the shops. For me, this includes strawberries, a supermarket strawberry tastes nothing like the sweet, beautifully flavoured fruit that’s picked straight from the plant on a sunny day.

This is the time of year to repair tools, lay paths, build walls and do all the things that there just isn’t time to do in the growing season. It’s the time to get out into the garden and burn off some of that Christmas pudding digging over the land in preparation for this year’s crops.

If the ground isn’t waterlogged or frozen now is a good time to plant apples, apricots, medlars, pears, plums, blackberries, gooseberries, raspberries, redcurrants, whitecurrants and blackcurrants. I dig a nice big hole, fork lots of compost into the bottom, pop in the tree, replace the earth around the roots and heel into place. I then put some scraps of cardboard on the ground to keep down weeds and stop the moisture from evaporating too fast. 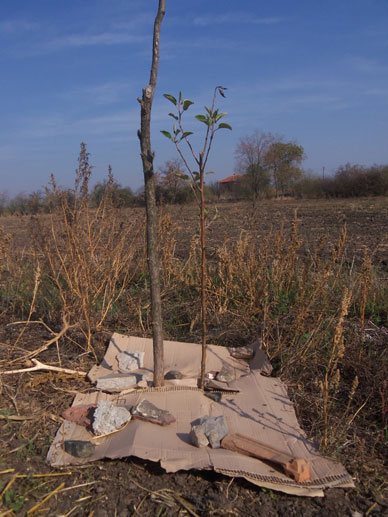 Winter is a good time to plant dormant fruit trees

Another thing to be getting on with is pruning your blueberries. Prune old dry stems from the third winter onwards, prune to the ground or else to a vigorous new shoot that’s close to the ground. Hard pruning in winter will result in larger, earlier fruit.

If you’re planning to start off rhubarb this year it’s a good idea to get the soil prepped now, as rhubarb stays in the same place for a few years it’s worth spending a bit of time and effort making it a nice home. To do this dig a hole 2′ (600mm) square where each root is to be planted, pop a bucket full of well rotted manure or compost into the bottom and fork it well into the soil, then chuck another bucket full in and return the top soil. If you’ve got more than one root to plant space them 3′ (1m) apart and mark with a stake.

Cauliflowers can be sown in January or early February into a tray of seed compost and they want to be kept at about 10 degrees C. When they are big enough to handle prick them out into a tray of potting compost spaced 2″ (50mm) between plants each way. Cauliflowers will yield well but be warned they are one of the more difficult brassicas to grow. They need well cultivated soil that has had plenty of manure, they also need non acid soil so you must lime if necessary. To get the best results they need to keep growing steadily without any sudden shocks. When you buy seeds to plant now you want to look for a summer heading variety.

Tomatoes can be started off now as long as you have somewhere warm to put them and I’d keep them there until at least 2 weeks after the last expected frosts. The seeds need to be kept above 18 degrees C. Sow them in trays of compost, water but don’t drown them then leave in a warm place out of direct sunlight, I just pop the tray inside an old compost bag, leave them in a warm place, checking to see when the seedlings pop their heads up. When they do move the tray into a sunny position, or take off the compost bag.

Sow onions in trays or pots of seed compost that has been pressed down slightly, (If you dust a fine layer of lime on the surface it makes seeing the seeds much easier.) sow at 1″ (25mm) spacings then dust with more compost and water well through a fine rose or a sprayer. Cover with glass then newspaper and place in a cold greenhouse, a cold frame or under cloches. Remove the news paper as soon as the seeds germinate and the glass before the seedlings reach it.

Radishes can be grow in cloches. To do this put the cloche in place 2 weeks before you intend to sow to warm the soil a little and to prevent excess moisture. Sow thinly in drills 1/4 of an inch (5mm) deep and 6″ (150mm) apart. You want to aim to sow seeds about an inch (25mm) apart as if they are too close the plants will produce foliage instead of roots.

Lettuce can also be planted under cloches that have been in place for 2 weeks. Sow them in drills half an inch (10mm) deep, pop 3 seeds in every 3 inches then thin the 2 weakest plants when half an inch tall.

By now you’ll be working your way through your supply of leeks. If you have any left you can dig them out and heel them in close to the house so you don’t have to go too far for your leeks. Heeling in means opening the ground with a spade and putting the leeks in quite thickly and heeling the soil back onto the roots. They won’t grow anymore but they will keep fresh and alive. They don’t mind frost. 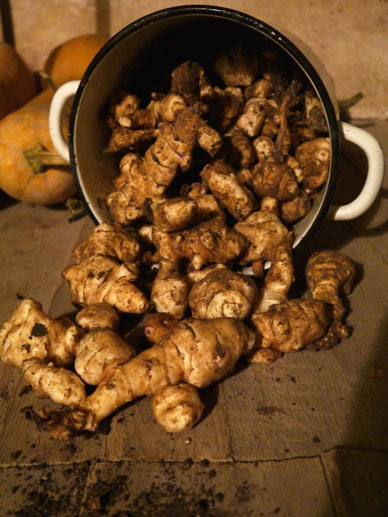 Jerusalem artichokes (above) can be left in the ground all through the winter and if you leave a foot (300mm) of the stalks on you can locate the plants even if there has been snow. These tubers look similar to ginger and are said to make you pass wind but in my experience they don’t have this effect. I read they are good when deep fried but I didn’t like them that way, they were too soft and sloppy. Boil them for about 5 to 10 minutes (depending on the size – until half cooked), drain the water and return to the pan with a nob of butter and some lemon juice and cook for a few minutes. Remove from the heat and mix in some single cream. Cooked like this they are tasty, although my my girlfriend still doesn’t like them! I suppose it’s a matter of taste.

Kale is good to harvest now. If you cut the centre of each plant first it will encourage the production of fresh side shoots.

If the winters where you are are not too cold you can leave cabbages in the ground until you need them. In climates where there is lots of snow and ice you can clamp them or make sauerkraut. 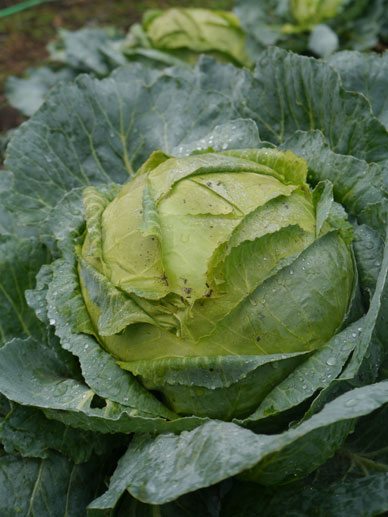 Clamping is the traditional way of storing some vegetables (mostly root vegetables) but it’s not very effective for small quantities. To make a clamp you pile some straw on the floor, then make a mound in the shape of a pyramid of whatever crop you want to store. Cover with more straw and then cover this with a layer of soil 5 or 6 inches (13-15cm) deep. Beat the soil flat with the back of a spade making sure that some bits of straw protrude from the clamp in order to allow some air in.

Sauerkraut is another traditional method of preserving cabbage with a sour flavour that really compliments fatty meats. I love this with a good piece of roast pork or served with cold ham, cheese and pickles. It’s easy to make and you can find a recipe here.

Brussels sprouts should be picked from the bottom up. The sprouts at the top can be encouraged to swell by removing the cabbage like head at the top, this can be cooked as a separate vegetable.

Antony Barrett and his girlfriend Steff run Frog Shadow Farm, a self-sufficiency project in Bulgaria. You can follow their antics by searching Frog Shadow Ltd on Facebook.