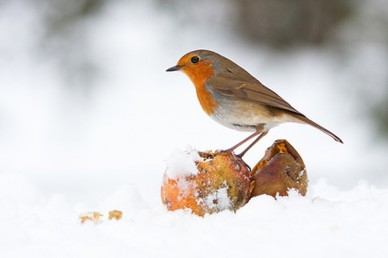 This time of year there isn’t that much you can do in the garden. So now is a great time to study seed catalogues, locate nurseries and plan for the year ahead in the warmth provided by your hearth.

You can build walls, make paths or re-design your garden if the mood takes you. There are plenty of ideas out there and here are just a few of my own that you could try:

The keyhole raised bed enables you to get the very most out of a limited space. If you build your raised bed with a keyhole shaped walk way leading into the centre you can make a wider bed without wasting any growing space.

Great for upcycling old lumps of brick, stone, tile or hardcore. The idea behind the herd spiral is to create multiple environments in a small area. Plant herbs that like hot weather on the south side (in the northern hemisphere) and the ones that like cooler weather on the north with the ones in between at the the east and west. They can be grand and elaborate affairs but, in its simplest form, it is a roundish mound of earth enclosed by a stones/bricks with other rocks inserted into the mound to form the spiral pattern to the top. The stones act as thermal collectors and release warmth they have collected from the sun throughout the night. There a details of how to build a herb spiral in a previous Pocket Farm article. 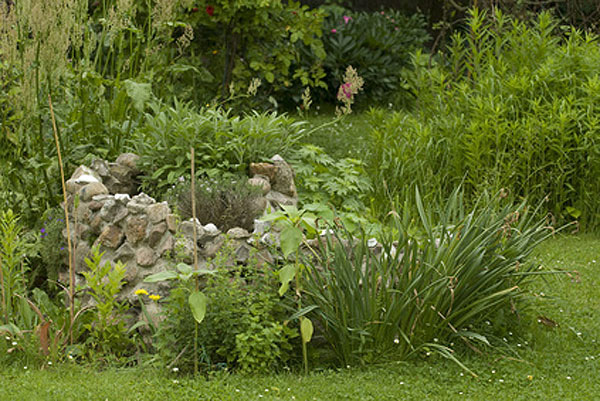 When you plan a new hedgerow there are many things to consider including final height, thickness and ultimate function. The main reasons for planting hedges are to shelter your garden from the wind (or prying neighbours) or to contain or exclude livestock but, by choosing wisely, you could also build in a bonus crop such as fruit or raw materials such as canes.

TIP: If you want to create some shelter quickly in a very exposed position and you are finding it impossible to establish your favourite plants use very hardy and quick growing trees and a year or two later you can use their shelter to help establish a more desirable wind break. When your desired stock has grown strong, you can slowly remove the first rows for fire wood.

Below are a few ideas on what your edible hedge could contain. For more in depth reading I recommend a book called Plants for a Future: Edible and Useful Plants for a Healthier World: 1

by Ken Fern, he has also established a very useful website of the same name that contains photos, descriptions and interesting uses for thousands of plants.

Curry plant (helichrysum italicum) grows in more mild areas of the UK as -10C will kill it. It can grow 60cm tall and 100cm wide.

Heather (Calluna vulgaris) is a great attractor for bees, butterflies and moths, which in turn will help your garden flourish. Branches can be used as insulation, thatching, bedding for animals and for making rope.

Hyssop (Hyssopus officinalis) grows 60cm tall and wide. The leaves have an aromatic flavour that’s like a cross between sage and mint. It should be trimmed in Spring.

Lavender (lavandula angustifolia) grows 1.2m tall by 1m. The flowers can be turned into an essential oil that repels insects. You can pop a few dried flowers into your linen cupboard to keep moths away and it will impart a lovely scent on to your sheets. The leaves are also said to discourage mice.

Rosemary (Rosmarinus officinalis) grows about 1.5m tall and wide. Will repel insects from neighbouring plants. Leaves can be used to make an anti-dandruff shampoo and to make a yellow-green dye.

I would recommend these for shelter but you could plant common fruit trees on stretched wires and train them as cordons or as espalliers which would make a bountiful harvest in a limited space. For those of us who have plenty of room to play with why not try some more exotic and interesting species such as those listed below.

Bitter Orange (poncirus trifoliata) is the only shrub in the orange family that is truly hardy enough for the English climate. It grows about 3m tall and wide and has thorns so makes an excellent barrier. The fruit is about 3cm across and although it’s too bitter to eat fresh it makes a tasty marmalade.

Ramanas Rose (rosa rugosa)  Has fruit like rose hips on steroids and grows 2m tall. Prickly stems will stop any unwanted visitors. Like rose hips the seeds have little hairs on them that irritate the skin (traditional itching powder of the school yard) A nice tea can be made from the flesh of the fruit, they can also be eaten fresh once you have removed the hairy seeds.

Common Barberry (berberis vulgaris) produces a small edible fruit. Its very sharp flavour is loved by children but they are also great in preserves. Grows 3m tall and 2m wide. This shouldn’t be grown in grain producing regions as it can harbour black stem rust.

and some old favourites….

Elderberry (sambucus nigra) is one of the best known hedgerow treats and I’ve planted a few for the sole reason of having a good supply of elder flower cordial. The flowers and berries also make some of the most popular country wines, that can rival your favourite shop bought tipple. If left untrimmed will get rather too large for a hedge but trimming in the winter will give you a heavier yield. The leaves make an effective insect repellent, simply rub the leaves onto your skin and you’ll be a bit greener but the mozzies won’t bother you. You can also make an simple insecticide from 4 handfuls of leaves boiled in a litre of water. 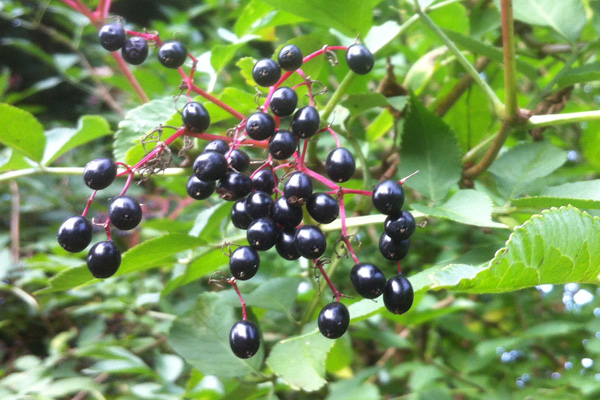 Hawthorn (crataegus monogyna) is one of the most common hedging plants in the UK as it is easy to look after and if laid now and again makes a stock proof barrier. The fruit known as haws are edible but fairly bland and mealy. In ancient Greece and Rome hawthorn was a symbol of marriage and fertility and later on in England and France May Day celebrations included hawthorn flowers (may blossom) as a symbol of love and betrothal. You can make syrup or liqueur from the flowers and wine, jelly, ketchup and chutney from the haws. Modern medicine uses extracts from hawthorn to treat heart problems. An interesting fact is that you can graft pear onto hawthorn. 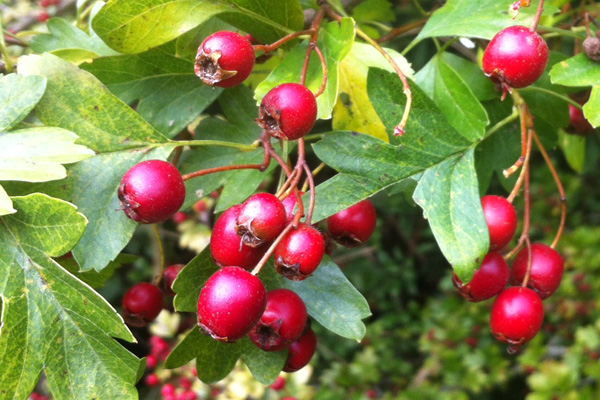 Blackthorn (prunus spinosa) A.K.A sloe berry is a prickly old blighter but I wouldn’t be without it, where would we be without a glass or two of slow gin at Christmas? I have also made wine from a mix of sloes and blackberries that is quite honestly the best I’ve ever had – shop bought or home made! You can also make a good strong walking stick from the wood. 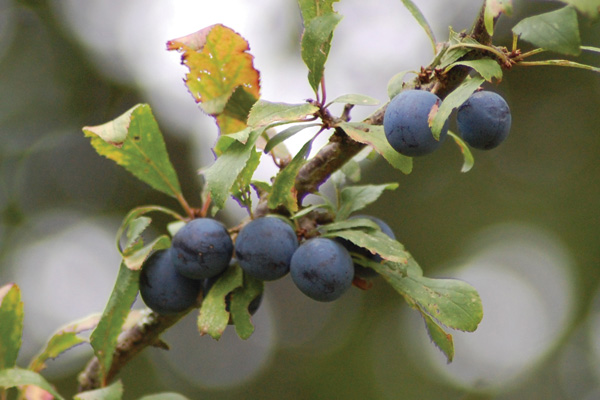