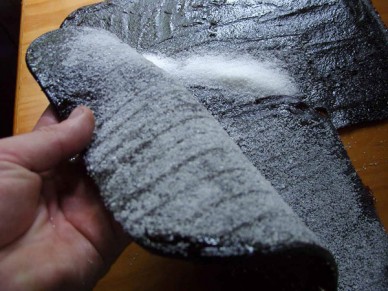 If all has gone well it may seem there is almost too much to pick, preserve, store or even give away at this time of year so below are a few ideas of what to do with your bounty.

During August I’m normally found by my big old preserving pan making up some sort of concoction for the winter pantry. This year I’m trying out an old method of preserving fruit; making leather which involves lots of labour, fuel and fruit but doesn’t need any additional ingredients. You end up with a product that keeps pretty much indefinitely and makes a nice chewy treat. To make fruit leather collect a few buckets of apples or pears and any other fruit you have to give flavour, I use about one quarter flavouring fruit. Put all these in a big pan (pic below) and boil it into a mush then push through a sieve, return to the pan and boil down for many hours until you have a thick puree then spread this onto well greased baking trays about half an inch (12mm) thick. Now you can put them into a very cool oven overnight or if you have a hot spell you can leave them in the sun to dry out into something that is incredibly similar to leather but tastes lovely. I chop mine up into little squares and sprinkle with sugar to reduce stickiness then pop them in an airtight container where they will keep well for many months. 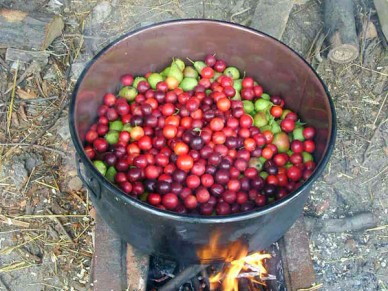 Fruit ready to be boiled down and made into ‘leather’

What to do in the garden

Cauliflower heads turn yellow if allowed to see the sun so you need to break the top couple of leaves enough to cover them.

Celery should be earthed up to blanch the stems.

Strawberry runners should be pegged down and organised. Once the runners establish themselves you should throw away any plants that are older than 4 years.

Peach trees should be pruned after fruiting.

Raspberry canes can be cut to just above ground level after fruiting.

Onions can be sown in a seed bed for next year.

Carrots can have another sowing now but you’ll need to cover them in October to ensure a reasonable harvest.

Corn salad is good if you like to eat salad in the winter, plant it now.

Turnips and swedes can be planted now. Swedes will survive in the ground after frosts but it’s probably a good idea to bring them in before any major snow.

Cucumbers will be coming thick and fast, keep on removing the male flowers to make sure you get tasty cucumbers. 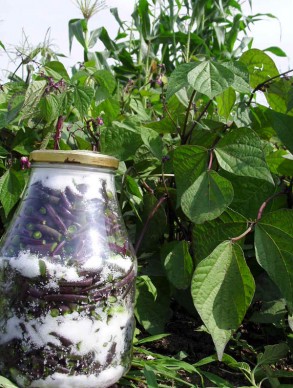 French beans just seem to never end, keep picking and they’ll keep coming. The can be blanched then frozen, salted or if you have enough in your stores already you can leave them to ripen fully into hard little beans for winter re-hydration. To salt them you’ll need a big jar, put 4oz (100g) salt into the bottom, then 1lb (500g) French beans, on top of this place another 4oz (100g) salt, continue this layering pattern until the jar is full. In a couple of days they will have shrunk down a bit and you can put another layer on top. Make sure there is a layer of salt or brine covering the beans. 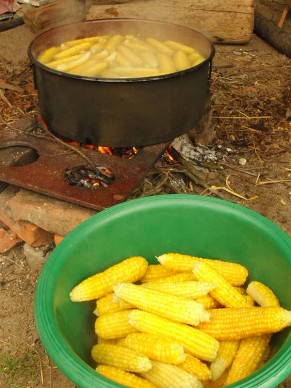 Sweet corn is treasure of the garden, these golden nuggets are so good fresh but alas they seem to ripen in batches, so you have loads one week and none the next. To spread out your sweet corn pleasure you should harvest them when they are at their best, to test for this you need to peel back the outer husk and stick a finger nail into a kernel, if a watery liquid comes out they’re not ready, if a milky liquid comes out they’re perfect, if no liquid comes out then they have passed their best and can be fed to the animals. Once harvested you need to work fast as they start to loose their sweetness a soon as you pick them. I pick them, throw them in a big pan of boiling water for 5 minutes, then into a bucket of cold water. You can now cut off the kernels with a knife and either freeze them or dry them out in the sun or a very cool oven. I dry mine on the roof still on their cobs, but you need very hot weather for this to work.

Runner beans crop like mad, you can salt them like you do French beans or blanch and freeze them.

Courgettes seem to go mad and before you know it you have more marrows than you know what to do with. They can be cooked on their own but then they’re pretty boring, try stuffing them, grating them into salads, frying slices in butter with lots of salt and pepper, you can even make an interesting and potent wine in a big marrow, chop off the top, scoop out the seeds, hang up in a net then fill up with sweetened apple juice, ginger and some wine yeast, stick the top back on and leave for a month, stick a pin hole into the bottom on the marrow, collect the liquid, to every gallon (5l) add 2lb (1kg) sugar put this into a demijohn to finish off fermenting and settleing.

Peas, sweet and fresh are great, eat as many as you can, the excess can be frozen or dried.

Cabbages will be ready now. You don’t have to harvest whole heads at once, cut off what you need and wrap up the rest in cling film it will keep much better on the plant than in the fridge. Once you’ve taken the heads make a cross cut in the stem and you often get a second crop of smaller heads.

Cauliflower are always worth the effort. Harvest in the morning to ensure crispness once cut they wilt quickly but you can pull up the whole plant and put in in a cool dark place where it will keep for a few weeks. Florets can be blanched then frozen or added to pickles. You can’t get a second crop from cauliflower like you do cabbage.

Tomatoes in a good year will produce a huge number of fruits, it’s sometimes hard to think what to do with them all, they can be bottled, dried, added to chutneys, made into ketchups, juiced and plain old put in salads. 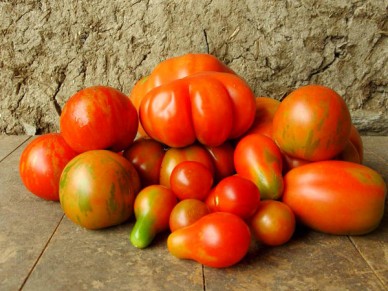 Apples can be harvested for eating now but earlies tend to only store for a short period so use up any excess by making apple juice, cider and if you’re feeling adventurous you could make some fruit leather. 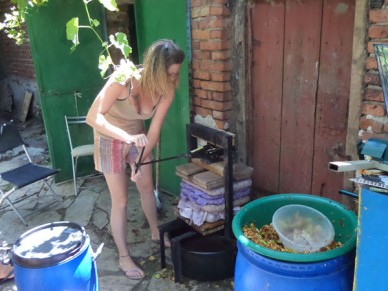 There are other things you can do with apples – but why would you?