By Mark Hajdukiewicz on 22nd January, 2013, filed in Poultry 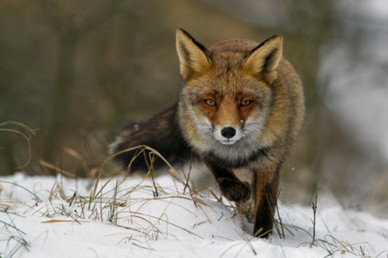 Wherever you live, town or country, if you keep poultry or other small animals such as rabbits, it is almost inevitable that you will cross paths with a fox at some time or another.

These wily adversaries are a perennial problem, and one that needs to be addressed continually when considering your birds”s safety. This article focuses on the most popular and effective deterrents but there really is no substitute for securely housing your animals in the first place. All your coop”s vulnerable doorways and access points should have proper locks, not just wooden catches. Your run should also be fortified to stop them digging under the wire, either by continuing it into the ground or incorporating some other dig proof surround to stop these accomplished excavators getting in under the frame. Foxes can jump higher than you might think too so, especially if your run is open topped, 6ft should be considered the minimum height.

As poultry keepers you will expend a great deal of effort trying to keep foxes from using your coop as a fast food restaurant however, despite all the aggravation, most of you will still be keen to achieve this as humanly as possible. None of the following methods are guaranteed but they have all been used successfully by experienced keepers. You may discover your own favourite or employ a combination of these suggestions for best effect but here, in reverse order, are Hertfordshire”s top five most widely used methods of fox control.

No, unfortunately there isn”t a magic trick that will make them disappear but the addition of well placed mirrors around the coup can be enough to convince a prying fox into thinking it has strayed onto another animals territory. A new one on me but is proven in battle so makes it in at no. 5

These can work but you get what you pay for and as they start at around £20 there are many other cheaper and equally effective measures you can try first. Remember these will be audible to dogs so if you do try one then best to opt for models that only sound when they detect a predator approaching and not one that broadcasts all day or you could find your pooch on the door step with their bags packed too.

A radio left on in the coop overnight can prove very effective simply because a fox would generally prefer not to be in the presence of humans. Chris Moyles would, without doubt, keep me away but if your foxes have a penchant for aimless, inane, chatter you may find other stations more successful. Simple lighting arrays that mimic the eyes of another predator can also work.

Probably the most obvious solution and very effective at keeping prying predators at bay. A single strand at snuffling height maybe enough as foxes check everything with their noses first. It shouldn’t take many shocking encounters for them to get the message but for a particularly clever or persistent visitor additional strands higher up may be necessary. It is important to fit electric fencing properly so be sure to get advice before installation.

This is by far the most widely suggested method and this is almost certainly because it is simple, effective, readily available and completely free. Foxes mark their territories by urinating around the perimeter and for all their bad press foxes do seem to at least respect the territories of neighbouring groups so it won”t take a great leap of imagination to understand why this works so well. There are two methods of human scent marking that are well used and both can be extremely effective. The first involves collecting human hair (male works best), either your own after a trim or by asking at your local barbers. Stuff some into a pair of old tights and hang them around the margins of your garden. The other involves directly mimicking a fox”s territorial behaviour by the application of male urine to your boundaries – you can choose whether you apply directly or, more discreetly, fill a container for later use. If you don”t fancy peeing on the primroses then Scoot Fox Repellant work on a similar principle.

..and finally an unexpected alternative

I have spoken to one poultry keeper who has a somewhat unconventional method of fox control. He feeds them! Although he has nine, very securely constructed, chicken enclosures, he also enjoys watching his three regular vulpine visitors and has built up a certain amount of trust with them. He is careful not to overfeed so as not to interfere with the natural urge to hunt and scavenge and, believe it or not, this “keep your friends close but your enemies even closer” approach has resulted in no attempted break-ins for a number of years. He has also noticed the added bonus of a reduced incidence of rats. May not be for everyone but, as we mentioned earlier, whatever works best for you.

Many thanks to the members of www.ex-battery-hens.com and the Luton and District Poultry Club for their help compiling this list.