Home » » Blog » Field target archery: the most fun you can have with sticks

Field target archery: the most fun you can have with sticks 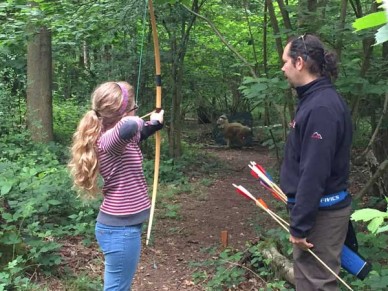 I describe archery as the most fun you can have with sticks as it is, in essence, shooting little sticks with a big stick while surrounded by sticks. I love it and I have just completed a longbow course at Celtic Harmony, a local cultural heritage education centre, where me and my daughter were introduced to the delights of this traditional weapon and how to shoot instinctively.

The experience with the longbow is entirely different to other bows I have used. There is no arrow rest so you shoot off your knuckles for starters and, in fact, the only thing that interrupts the sleek D-section line of the all wood, 6ft long, bow is a minimalist leather grip.

Starting in a purpose converted barn our instructor gave us a short history of the bow and its development before going over the safety information – these bows are definitely not toys and can cause serious injury if not handled responsibly.

A muscle, stance and draw warm up followed allowing our instructors the chance to observe and adjust our grip, or posture as necessary in order to ensure we used the correct muscle groups (more back than arms) and give us the best chance of hitting the target.

Instinctive archery works on the theory that if you are looking exactly where you want the arrow to go, are standing in the right position and draw and release smoothly then it goes roughly where you want it to. Adjustments need to be made for targets at differing distances and to allow for the more curved trajectory of a longbow arrow so it’s achieving a good grouping first that is important – you can adjust your aim from there. It became very apparent that consistency is king throughout the whole process but essentially the theory is sound and, much to my surprise, worked remarkably well.

As our grouping improved the targets moved back down the barn until by the end of the first session we had all doubled our initial distance to 20 metres – I think we were all suitably impressed with ourselves – especially my 10 year old daughter who was easily keeping up with the four other adults.

The next session, after our obligatory warm up, continued on targets to get our eye in again but after a short time they moved these out the way so we could have a crack at the 3D targets that festooned the far reaches of the barn. From various distances and angles we were now shooting at foam elk, bear, dinosaurs and turtles, targets of all size and shapes – this was more like it! It took a few arrows to adjust again but we were soon all peppering the kill zones and feeling like regular Robin Hoods….and then, just as we were getting a bit cocky, the apple challenge loomed.

Exactly as it sounds we lined up one at a time on the shooting line to take three shots at a life-sized foam apple that was over 20 metres away. Me first and, feeling surprisingly confident, I loosed my three arrows. I was slightly disappointed not to have hit it although that might have been asking too much at this stage – however, all three were gratifyingly close and I was happy that I had set the bar at a reasonable height. That was until my daughter stepped up and proceeded to put her three just inside mine and hold the winning position until the end. Victory was snatched from me by the width of an arrow but the fleeting disappointment was soon superseded by enormous parental pride and needless to say she was delighted. 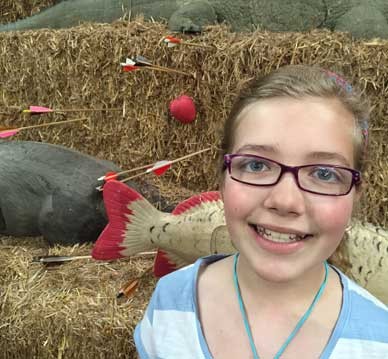 Daisy takes the honours at the apple challenge

For the third session we moved into the woods for a taste of real field target shooting. The course consisted of 18 full size 3D animal targets each with a number of coloured pegs at varying distances. Depending on age if you miss at one distance you might move to a progressively closer peg and the scoring system depended on where on the target you hit and from what peg. 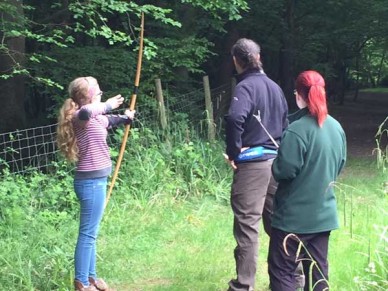 The longest range target – this one was 30 yards away

With other archers walking the course safety was paramount so rules about how to navigate around were explained before we set off. Distances and size of targets varied enormously as did the angle they were positioned at – some at head height and some on the ground. Being in the woods put all we had learned previously to the test forcing us to compensate for all those variables as well as introducing awkwardly placed bushes and sidewinds into the mix. A lot to contend with but everyone really embraced the experience and by the end I think we all made a good account of ourselves. On this day I took a narrow points victory so my nice warm victory glow, previously denied, was now fully restored. 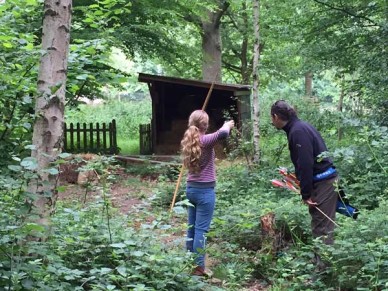 Needless to say my daughter and I now have the bug. There is something about the simplicity of the bow, how smoothly it pulls and the woodland setting that is instantly gratifying so we have both joined the National Field Archery Society (NFAS) and the Celtic Harmony club so we can continue to hone our skills. One day we might even manage to spear that mocking apple…. but rest assured I won’t be placing it on anyone’s head just yet.

Celtic Harmony is an award winning charity, providing hands-on cultural heritage education of ancient Britain to increase understanding of the natural world and create a more sustainable way of life for future generations. They organise events for schools, families, team building and individuals including archery, bushcraft and ancient crafting techniques.