Experimentation is key for more productive and diverse cropping

By Iain Bagnall on 9th January, 2014, filed in Growing 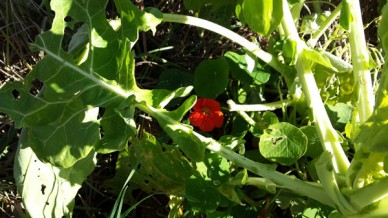 It was a lovely summer.

That seems like an odd statement at this time of year, but as the curtain has come down on 2013, perhaps it is time to reflect upon the last few months.

After the washout of 2012, then the seemingly eternal winter that was still jabbing its frosty little fingers into our tomato plants in June, it felt like there was a collective sigh of relief. The belated summer finally came, then went all too quickly ourselves becoming surprisingly negative about what we had achieved this year.

With no greenhouse, we took a gamble in the Spring and put our tender seedlings, lovingly nurtured for weeks on windowsills, out to fend for themselves, only to see most of them killed by frosts.

Frustrating as this was, we had kept some backup plants and were able to nurture along a handful of straggly latecomers into something productive.

Many of our other crops were killed off long before they got anywhere near the garden, our vulnerable little seedlings murdered by horrible little fungus gnats gnawing away at their roots.

We dreamed of kitchen cupboards heaving under the weight of preserved home produce and allotments full of wonderful winter veg, not the handful of jars of chutney and the few parsnips and lonely chard plants that we actually had to show for our efforts. An entire year of allotmenteering doesn’t actually seem to have yielded that much food.

It can be easy to become despondent about our failures and completely overlook the successes. However, what we really need to do is shift our thinking and aim to view even our failures as successes. We can do this, as long as we learn from our mistakes and apply what we have learned. Taking this feedback on board is vital, not just for our future success, but also for our morale.

Most of our real successes this year have come from experimental plantings. We made a decision to concentrate on perennials and they have generally done very well. Certainly, they seem to have established themselves nicely ready for next year and we are confident that 2014 should see the likes of soapwort, swamp milkweed and pokeweed (see footnotes) coming back strongly. We are crossing our fingers that other crops like purslane, huauzontle and amaranth (see footnotes) will self-seed from the thousands of seeds they dropped in the Autumn. If so, we hope to begin the process of developing our own locally adapted varieties which, over time, will become better suited to our soil and climate.

We have also learned some valuable lessons about our site. By scattering our plantings around, rather than row-cropping them, harvesting could be quite fiddly and time-consuming, as we had to scour the allotments for the next plant. However, we have discovered which areas and micro-climates are better suited to certain plants, meaning we are better-informed for our plantings this year.

We are fortunate enough to live in a time and place where we do not actually need the food from our allotment. But this may not always be the case. Indeed, very few people in human history have enjoyed such a luxury and we need to appreciate how lucky we are to be in a position where we can afford to experiment.

Our decision to experiment in 2013 meant that we sacrificed growing the more traditional annual crops and the result was, rather predictably in hindsight, a significant reduction in the amount of food we produced.

Next year, we will aim for a better balance between experimentation and production, but what we can take from this year, primarily, is how starkly gardening demonstrates the link between our actions and their consequences.

In this respect of course, we have actually learned far more this year from our failures than we would have by successfully growing an allotment full of potatoes, cabbages and onions.

We would urge everyone to experiment, maybe put aside 10% of your available plot for new plantings and also scatter your plantings around a bit. Your yields may be down on certain crops, but you will learn a lot.

Experiments still to be assessed: