Ducks as an alternative to chickens for new keepers 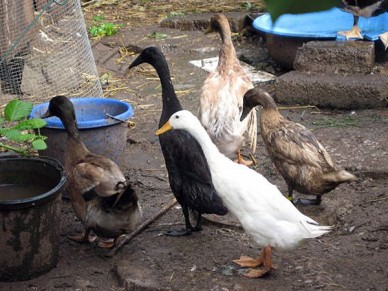 If you are thinking of keeping poultry, chickens are going to be the popular and obvious choice. However, ducks have been kept for eggs, meat and as pets every bit as long as chickens and have their own distinct qualities that, for some, will make them the poultry of choice. Alan Bailey has been keeping ducks for over three years now and here he shares his personal experiences with both chickens and ducks and compares the relative merits of the two.

Okay, this is true, it has to be said that ducks like mud. They will also nibble at any green matter and they will soon put paid to any lawn that they are allowed access to. If you are garden proud and you want to keep ducks you will need to have an area specifically penned for them. They love water but don’t be led to thinking you need to have a full scale pond as this is not the case, in fact droppings can turn a pond green very quickly, so many keepers find that a children’s paddling pool (the hard plastic clam shell designs are ideal) is just the right size for up to half a dozen ducks or so with the benefit that the water is easily changed or topped up as necessary. 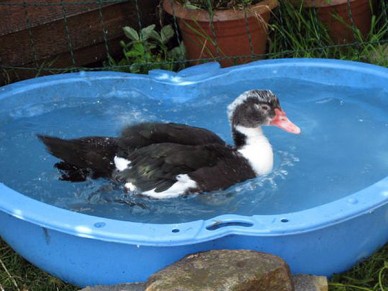 The area around the water container will get very muddy and I have found that, while ducks don’t dust bath like chickens, they do love a bit of mud and whether they are romping in it or dabbling in it they can’t get enough of it. You will find that their bathing water will get dirty very quickly as they are in and out of it but you won’t need to change the water every day, weekly should be adequate unless you have a particularly messy group or larger birds.

Ideally, as with all animals, you would have a couple of similarly sized areas that you can rotate them on but this isn’t practical for most small-scale keepers. Ducks do need more space than chickens, as a rule about twice as much both in the duck house and in the run and you certainly wouldn’t want to keep them in an ark or similar chicken run. You should look to be providing a good 10-12 metres squared per three ducks. Three, by the way, is the minimum I would recommend keeping as they are sociable birds and are unhappy if kept alone.

Well this is dependent on breed but generally no and unlike chickens it is the females that tend to make the most noise. Call ducks can be especially vocal as that is what they were originally bred for – as decoys for hunters – but other breeds such as the Muscovy are fairly reserved. All ducks can be excitable though, so if they see you coming down the garden with a handful of their favourite treat, you can expect a rapturous welcome. If you want to keep the neighbours happy then pick your breed wisely or go for males.

In the duck house

Ducks don’t roost on perches like chickens so a flat hard floored duck house with a reasonable scattering of straw (not hay as it can harbour fungal bacteria) suits them just fine – just clean out when the straw has become dirty or wet. Many duck houses come with chicken style nest boxes but I have found that they tend to lay wherever they are so even these are not essential.

It goes without saying that one of the main considerations for your enclosure is that it is secure from predatory animals which will inevitably be attracted to any area where poultry is present. There are many ways to fox proof your housing and enclosure and you will find a few tips in the article here.

So what do they eat?

Chicken layers pellets are fine for ducks and provide a balanced nutritional diet. As a treat you can also feed mixed corn, especially in winter as it gives them more energy to keep warm. They will also relish lettuce, spinach and any other green leaves that you may have spare in the veg patch – oh and you won’t have a slug problem if you have ducks in the garden as there is nothing they like more than munching on these molluscs. Fresh food and water should be available at all times and there is not so much need to include grit in the diet, as you would with chickens, as they tend to pick up enough where they are dabbling in the mud. 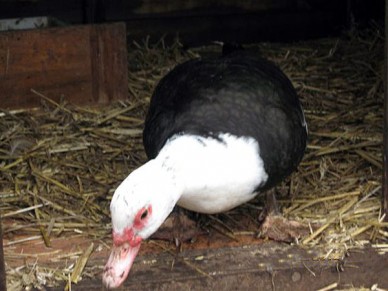 Up, up and away – do domestic ducks fly?

Again this is dependent on the breed but some ducks such as Call Ducks and Muscovys can fly very strongly and this should be taken into consideration when keeping them. The easiest way to restrict flying is to clip the primary feathers of one wing. Using the secondary feathers as a guide you can cut the primaries easily and painlessly but remember that every time they moult you will have to re-trim them. There is also a procedure called pinioning which is the process of removing the final wing joint in young birds – although this is still widely practiced and believed not to have any harmful effects on the young birds it is not something I would undertake myself.

Not so many trips to the quack

Ducks have a much stronger constitution than chickens and tend to be quite resistant to disease generally and I have even heard them described as either ‘quick or dead’. This is not to say they don’t suffer at all so watch out for infectious bronchitis which can affect egg production and cause wheezing with a nasal discharge. This should clear up fairly quickly but if symptoms persist beyond two weeks you should consult a vet. Aspergillosis is caused by mould spores and will cause wheezing and lethargic behaviour and unfortunately is incurable. On diagnosis affected birds should be dispatched as quickly as possible to avoid suffering. Lice and mites are much less of a problem than with chickens and treatment is usually a simple matter of cleaning their housing and dusting with an appropriate powder. Worms are a perennial problem with most animals and birds and again any occurrence is easily thwarted with medication that can be added to feed. Ducks have delicate webbed feet, so keep an eye out for damage or lameness. On the whole though, you should find general health care and trips to the vet will be less frequent than with chickens. 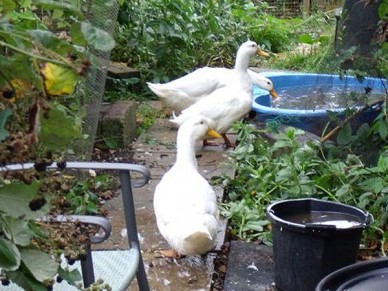 Most common breeds of domesticated duck except the Muscovy are related to the wild Mallard and this is clear to see in the plumage of breeds such as the Call, Saxony, Rouen and Appleyards. If you are looking for a classic storybook white duck then that’s the Aylesbury. With ducks the sex of your birds is less of a consideration as males can be kept together more readily than with male chickens. They can be aggressive towards each other at certain times but this is usually short lived and a calm equilibrium is usually restored fairly quickly. If you are keeping males and females together you should keep the ratio at around five or six females per male as any less than this and the attention they receive can be a bit overwhelming. When the males are in full tilt you should be extra observant as they do tend to favour ‘treading’ females in the water and this can be dangerous if the male is overly aggressive.

Call and Whistling Tree Ducks are small and make great pets but as mentioned earlier the females can be noisy. There are also ducks that lay just as many eggs as the most prolific chicken breeds with Campbells and Indian Runners being especially good if this is a priority. However, if you want a table duck, you should consider the heavier Saxony, Aylesbury or Cherry Valley varieties. There are also ornamental varieties such as the Mandarin and Wood Duck with extremely ornate plumage. These smaller breeds are the ones that are traditionally pinioned to stop them flying off.

Note: Duck eggs are more porous than chicken eggs so can absorb bacteria more readily – this is one of the reasons that ducks fell out of favour as egg providers, despite the fact that duck eggs are richer and considered by many as superior for baking to chicken eggs. That said, some people find they can’t stomach the richness of duck eggs and although they are excellent fried or as an omelette they can be a little rubbery if boiled. Collect eggs regularly to save them getting too dirty and give them a good wipe over before storing in the fridge, this way they should keep in perfectly good order for up to ten days.

As you can see there are similarities between keeping chickens and ducks which is why you often find enthusiasts keeping both. They can be kept together if you have a large enough area but you will need to provide different housing for the perching and nesting habits of the chickens. If you have a smaller area I would suggest keeping them apart as chickens will not appreciate the muddy environment created by the ducks. Ducks can be slightly more wary of humans than chickens but they are generally good natured and can become very tame through handling. So if you decide that they suit you and your property, make like a duck and take the plunge. I’m sure you will develop a soft spot for them very quickly…and I’m not just talking about the muddy patch they make by the pool.