Home » » Blog » Debate: Should we really be rehoming ex-battery hens?

Debate: Should we really be rehoming ex-battery hens?

By Mark Hajdukiewicz on 17th December, 2014, filed in Blog 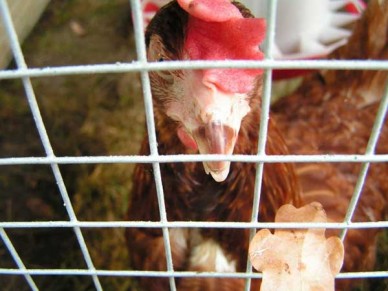 Talking to a group of experienced poultry keepers recently it became very obvious that there are two very clear camps on the subject of re-homing ex-battery (or intensively farmed) hens.

One side is pro the idea on the grounds that they suffer such unnatural conditions and laying demands that they deserve a taste of the good life when their hard labour is done. The other, while not disputing these issues, believe that the hens should stay in the food chain that they are destined for and that campaigning for higher welfare standards is a better use of resources.

Two completely opposing arguments from groups of people whose opinion I respect greatly. So I thought the question should bare some closer scrutiny. This article reports on the arguments I have heard but does not necessarily reflect my personal views or those of Pocket Farm directly. I’ll leave you to make up your own mind.

Note: While the article refers to these hens as ‘ex-battery’ this is perhaps a bit misleading as batteries were outlawed some years back in favour of new enriched or colony systems. The term for the purposes of this article can mean hens from any current intensive system.

The case against ex-battery hen adoption

This centres on the fact that these birds are bred to produce eggs and then go into the food chain as meat for various end products including ready meals, baby food, pet food etc. These hens probably wouldn’t find their way onto shelves as whole plucked chickens but will bulk out other dishes where appearance isn’t so important and cost is a critical factor.

They know no other life to the intensive farm environments that they are raised in and, as such, don’t have any comparison to make. When intensively farmed birds are taken out of that situation and then released into a completely foreign one there is an argument that this very gesture is in itself extremely stressful – the bird essentially having to re-learn all its basic functions including the fundamental ones of eating, drinking and sleeping.

A significant proportion of ex-batts will not make it past the first three or four weeks after release for exactly this reason. If we are going to credit them with human physiological needs, emotions and reactions it might even be that in the 18 months captive they may have become institutionalised. In those circumstances they may struggle to accept their new found freedom and have to live with that trauma – in the same way traumatic episodes can affect humans consciously or subconsciously.

Unfortunately, we could not produce enough meat cost-effectively by less intensive methods to meet the demands of the supply chain so there is a catch 22 there also.

These views were not entirely without experience either as many proponents had rescued intensively farmed hens themselves. One told me that she rescued 60, supposedly free range and organic layers, who immediately had to be quarantined away from her existing flock and subsequently destroyed as a large proportion were suffering with mycoplasma. With birds displaying signs of disease, comes the risk of infecting existing flocks. This particular discussion also brought to light another issue of the exact definition of farm standards as these hens were kept in barn conditions where dead or dying chickens were present  – not what I would consider free range or organic and not, I suspect, what the general buying public would think it’s supporting when buying products labelled in that manner.

Another related issue raised was that of bio-security when rescuing and distributing hundreds (or perhaps thousands) of birds at a time. For example, if there was an outbreak of bird flu, it may prove difficult to trace the source if large volumes of birds are being adopted, without paperwork, by the general public?

Everyone who was supporting the previous stance was sympathetic to the plight of these birds but were convinced the best recourse was to support a consistent, coherent and sustainable campaign for increased welfare for the flocks during their lifecycle. Organisations such as Compassion in World Farming are constantly working for improved conditions and practices around the world.

The argument for is that surely it is a good thing to want to provide these intelligent birds with the chance to experience a more natural existence for the remainder of their lives?

There is little doubt that conditions for chickens raised in many large scale systems are not conducive to instinctive behaviour such as scratching, foraging and perching and that overcrowded conditions can lead to feather pecking and other aggressive traits. In many intensive, so called enriched cage, set ups hens never see the light of day. Body clocks can also be altered by artificial lighting to achieve more eggs per day putting extra physical strain on them and there is lots of evidence to show that these regimes can cause vitamin and mineral deficiencies that lead to diseases such as osteoporosis. Even in systems that purport to be of higher welfare, birds are often encouraged to spend the majority of their time in enclosed overcrowded buildings.

In opposition to the previous argument, you will find many stories of ex-battery hens who have been adopted and spent many happy years as pets in wonderful loving environments. You will find that re-homing organisations are very aware of the potential stresses and provide advice on how to acclimatise them gradually to their new surroundings. There are also online forums and books specifically dedicated to the subject of ex-batts and their care.

Then there is the farmer to consider. A certain percentage of these hens must go back into the food chain by law but, already pinched by the supermarkets on egg prices, when the hens come to the end of their laying cycle farmers may be offered just pennies for the birds – sometimes it’s so little that it essentially amounts to free meat. Re-homing organisations will offer many times what the supermarkets pay, helping put some money back into the farmers’ pockets.

Of course many ex-battery hen keepers will also already be ardent supporters of welfare campaigns too.

So, there you have it, two completely different viewpoints both of which have compelling arguments. Which side do you support? Or do you think the balance is about right as it is?

I’d be interested to hear your views on either or both stances but please keep your discussions on this emotive subject reasoned and objective as posts with defamatory or expletive language will not be published.

I’ll leave you with the notion that whatever stance you take on the arguments presented here perhaps it is less about food for thought and more thought for food.