By Mark Hajdukiewicz on 23rd November, 2014, filed in Chickens and Bantams, Poultry 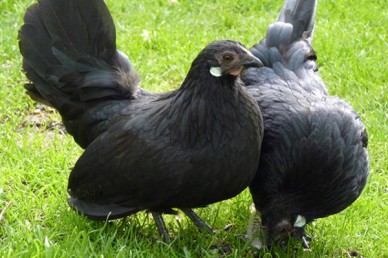 While many breeds have bantam varieties true bantams are naturally small breeds that have no large fowl counterpart. There are many true bantam breeds and those below represent a good cross-section and display a wide range of differing characteristics, appearance and temperaments. Small stature certainly doesn’t mean small personality – you’ll find some of the biggest in the poultry world right here. Many bantam hens are good sitters and they are regularly employed to brood the eggs of other birds including those of pheasant, quail or partridge. There are also several true bantams amongst the hard feather game birds but these will be the subject of a future article

Confusingly ‘Belgian bantam’ is an umbrella term for a group of 6 (5 standardised and one undergoing standardisation) closely related but distinct varieties developed, as you may have guessed, in Belgium. The group comprises the Barbu (bearded) d’Anver, Barbu d’Everberg, Barbu de Grubbe, Barbu d’Uccle, Barbu de Watermael and Barbu d’Boitsfort. The original Barbu d’Anvers is an ancient breed dating from at least the 1700s and is a small, clean-legged, rose-comb bantam with tiny or absent wattles and many colour variations. This and the Barbu d’Uccle which is a slightly larger, single-comb, feather-legged bird are the most common currently found in the UK. The d’Everberg, d’Watermael and d’Boitsfort are all rare variants. The d’Watermael is similar to the d’Anver with swept back crest feathers and an unusual spined rose comb with the d’Boitsfort being the rumpless variant. The Barbu d’Grubbe is a rumpless variant of the d’Anver and the d’Everberg is a rumpless d’Uccle which is classed as a variant in the UK not a separate breed. Cock birds have a reputation for being a bit ‘boisterous’ but whether that’s any more than the majority of other breeds is debatable. Belgians were first seen in Britain in the early 1900 but didn’t start to gain popularity until 1909 with the club being formed in 1915.

As the name suggests this is a feather (vulture) footed breed. Although the black and white varieties were developed in the UK, it is the Dutch and Germans who have championed the breed producing many colour variations many of which are now being imported back into this country. Although popularity is gaining here, especially for the millefleur patterns, the breed struggled to gain support historically and is still classified as rare. To maintain the prominent feathers on the feet they are often kept inside on soft litter, a practice that may also help prevent exposure to Marek’s Disease which they can be susceptible to.

If you intend to show your birds check lineage of your stock carefully as booted bantams are regularly crossbred with Belgium bantams, especially the similar looking Barbu d’Uccle (see Belgian Bantams above) producing a very similar looking offspring. There is also a rumpless variation know simply as the rumpless booted.

Beautiful classic looking cock birds with an enormous amount of colour variants. Introduced into this country in the 60’s with a club formed in1982 the Dutch continues to gain popularity.

Not really a breed for beginners, especially if breeding for showing, as standards are hard to maintain and genetic problems cause 25% of chicks to die in the shell. Japanese bantams are short legged and come in a mind boggling array of colour variations and three feather forms – normal, frizzle and silkie. This variety plus good temperament and maternal instincts make them attractive if you are willing to trade a fairly weak constitution for these attributes.

Another bantam of Asian origin, most probably Java or India. This breed comes in a single colour, buff, but has 2 varieties distinguished by their differing combs – single or rose comb. Both sexes have black tails and both varieties have slate grey legs. Dwindling popularity now sees this breed listed as critical even though this neat looking bird has many desirable features including a friendly, home loving personality, good egg production and a tendency to be less flighty than some other bantams. The Nankin is one of the oldest true bantams and has been fundamental in the formation of several other more recently standardised breeds such as the Sebright. The name is thought to originate from its similarity in colour to nankeen cloth although others believe it is simply after the Chinese city of Nanjing (where the cloth was originally produced) and where they were imported from.

Developed on the Japanese island of Shikoku the name translates literally as ‘small dragging’ after the exceptionally long tails sported by older males of this short legged breed. These can easily become dirty so consideration should be given to the environment provided. No UK club or society currently exists. 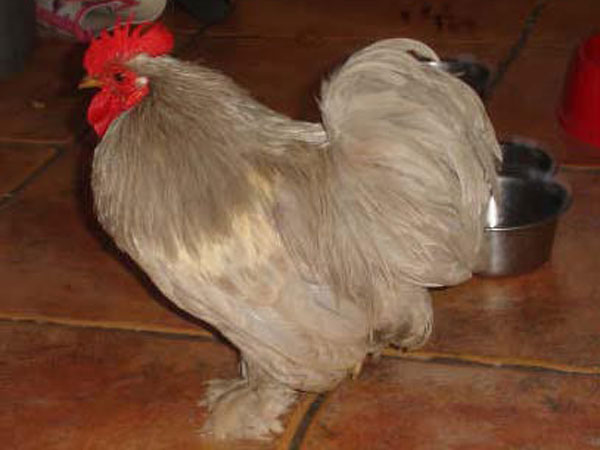 An exceptionally friendly breed, Pekins make great pets for adults and children alike. Available in many colours and with their distinctive feathered feet this breed is often described as resembling a small Orpington although there is no genetic link. Fairly good layers, Pekins make good mothers and/or broody hens for eggs of other, less maternal, breeds. First seen in Britain in the 1860s they were introduced from Asia. With its huge popularity you shouldn’t have any trouble finding a breeder in your locality. We have also covered Pekin bantams in more detail previously. 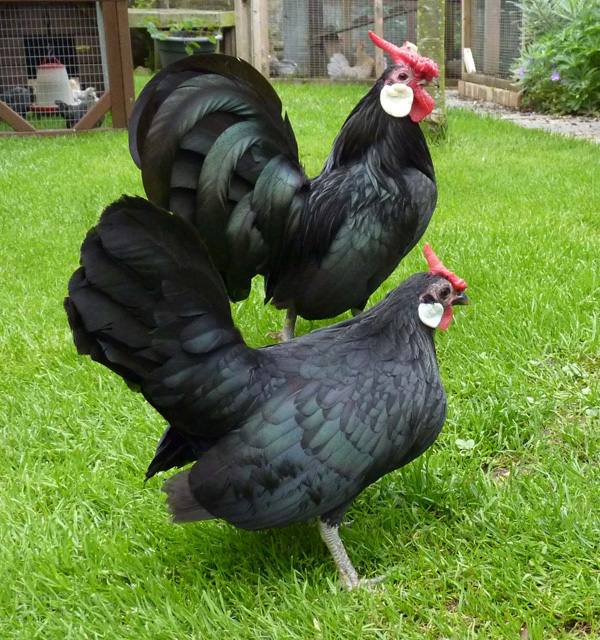 Described by the Poultry Club as a gem which ‘…in former days achieved probably the highest pitch of artificial perfection ever achieved in exhibition birds’ the Rosecomb is a bantam of British origin. Although details of the breed’s development are scarce documentation places its existence somewhere prior to 1483 and it is thought that King Richard III was a keeper at around this time. Rosecombs are an inquisitive breed that can become very tame if handled regularly.

All colours are extremely attractive with the clearest defining characteristic being large white earlobes and a long, neat rose comb tapering to a point. 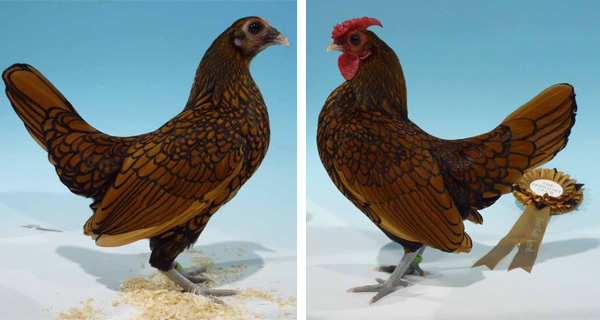 The Sebright was developed over 200 years ago by Sir John Sebright. Hailing from Hertfordshire, Pocket Farm’s home county, Sebright’s are available in only 2 colour variations, gold and silver, with each feather delicately laced with black. The males are described as hen-feathered meaning there is a lack of the long curved hackle feathers associated with other breeds. While there is some argument as to the exact ancestry of the Sebright it has played a role in the development of other lace-feathered birds including the popular Wyandotte. Not thought of as a breed for beginners as they can be flighty but regular handling from a young age can lead to calmer more manageable birds. 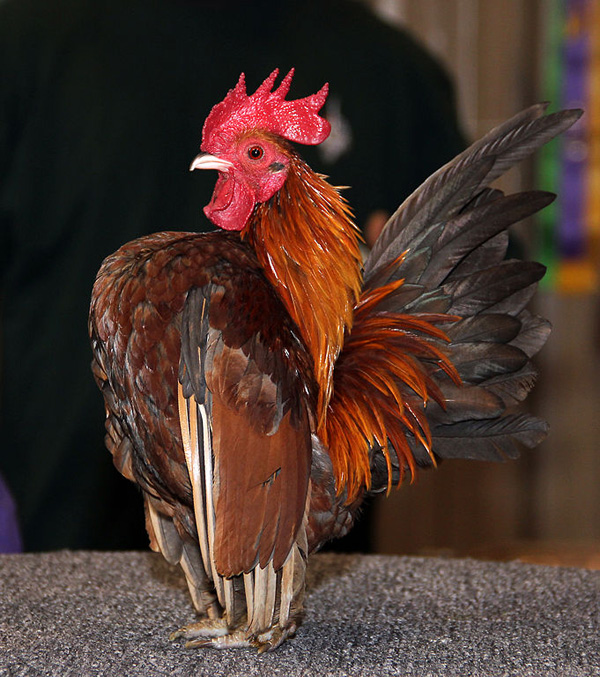 The Serama was introduced into Britain as recently as 2004. Although the modern breed was developed by Wee Yean Een in the 70’s its origins go back as far as the 1600’s.

One of the most popular pets in its homeland of Malaysia, this is the smallest breed of chicken. Males and females are both extremely attractive and proud looking birds with the male’s upright posture and downward pointing wings being one if the major defining characteristics. They are good natured and confident if handled regularly. There are also silkie and frizzle feathered varieties.

Egg colour: White to brown
Colours: All are acceptable according to the standard but popular colours include white, black, buff, red, partridge, wheaten, mottled, spangled and duckwing
Weight: Male – up to 500g Female – up to 500g
Breed club or society: www.seramaclubgb.co.uk