By Mark Hajdukiewicz on 14th August, 2013, filed in Livestock, Sheep and Goats 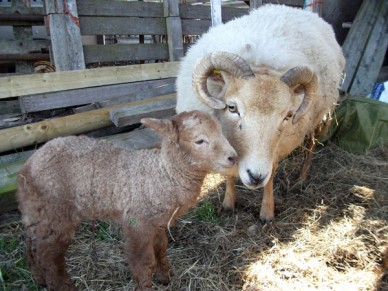 Sue Stennett is a regional representative for the Portland Breeders Group and has been keeping them for over 30 years. When asked why she chose them over the many other breeds available her reply is compelling “Why wouldn”t you? They are an attractive endangered breed with a fascinating history, they are easy to handle and taste good – what else does a smallholder need?”

Portlands are a relatively small breed with a typical ewe weighing 35-40kg and adult rams ranging from about 45-55kg. The body of a Portland is of a primitive type within the Downs breeds. It is long tailed with fine boned legs that should be free from wool below the hock. The face is a tan colour with a dark nose and may have lighter areas around the eyes and muzzle. The face is generally free from wool although it is not unusual to find a light covering of wool on the forehead. The rams horn”s are spiralled and light coloured; in ewes they curve through a half circle and here is often a black line in one or both horns.

The breed is still designated “at risk” by the Rare Breeds Survival Trust but is now thought to be out of immediate danger due to the Trust”s efforts when stock declined dangerously low to only 100 animals in 1977. There are now over 250 registered UK breeders. Although its origins are sketchy, it is named after the Isle of Portland where it was first bred. Being isolated as it was it is thought that the breed has survived less affected by commercial pressures than many of the other tan face, horned sheep that were found across the south west prior to the Roman invasion. The breed does, however, have more characteristics in common with some Mediterranean breeds than those of our native primitive sheep such as Soay and Shetlands which could be the influence of the Roman occupation.

The wool is close and fine with a short staple which produces a woollen yarn that will be soft, light and warm so excellent for knitted jumpers etc. It is very good for hand-spinning although short staple wools can be difficult to use for beginners. Being white it will also dye readily however, it is a breed characteristic that some red kemp fibres will be found on the outside of thigh (britch).

Portlands also produce an exceptionally high quality fine textured meat with an excellent flavour and it is even said that George IV was a great fan traveling to Weymouth specifically to dine on Portland mutton. They tend to grow more slowly than commercial sheep and as the lambs are small they are traditionally kept until they are yearlings before slaughter. They also milk well.

This breed is unusual in that it can lamb at any time of year, they usually lamb easily if it is presented properly although occasionally an inexperienced ewe will need a bit of help if she is trying to push a large ram lamb. Although they almost invariable, only have one lamb the ewes can easily cope with two so they may be able to take orphans should you need them to. Lambs are born with a red coloured coat, which is likely to have been closer to their original colouring, but this changes to creamy white in the first few months.

Portlands are a fairly hardy breed and can live out all the year and even lamb outside in many areas but they are best brought in in severe weather and it is good practice to put the ewe and lamb in a pen for 48 hours after lambing to help the mother and lamb bond and to protect from foxes.

They are generally a quite settled and calm breed although they can prove difficult to catch if they are inclined. Electric fencing tends not to be a good idea for horned sheep as they will inevitably put their noses through the fence to browse and can panic when shocked which can result in them getting stuck and, in a worst case scenario, death.

General healthcare routine is the same as for all sheep but tails are left on in pedigree sheep so take precautions and keep watchful eye for flystrike from May until sheering.

Portlands are happy foraging and enjoy older nettles and even thistles! They are a good choice for conservation grazing as they thrive on rough grass and shrubs, nevertheless some concentrate feed may be needed in the winter, depending on the quality of your hay/haylage. Pregnant ewes need some up to lambing and for about a month after but should not be allowed to get fat.

Despite their imposing appearance rams are certainly no more difficult than those of other breeds. They are happy with a weather or two for company when not with the girls but it is advisable not to hand feed as this can make them demonstrative. They will cope with up to 40 ewes, as in other breeds. It is still wise to gain a bit more experienced before taking on a ram though – perhaps consider borrowing or hiring one initially if you want to breed.

All in all Portlands are a great all rounder. As you can see the breed is especially suited to smallholders but this attractive, multi-faceted, sheep would be a great addition to any farm.

For more information The Portland Breeders Group has a very good website with contacts all over the country, who will help and advise anyone interested. At the recent Annual Portland Day several new breeders said they had gone into Portland because of the friendliness of the group members. If you want to keep an endangered breed, then you should consider becoming involved with such a group. If lambs are not registered then they cannot be considered Portlands and cannot be sold to contribute to the breed gene pool. An unregistered lamb can only ever have a meat value so it is important when buying to make sure your sheep are registered so you can do your bit in support of the conservation effort.