By Mark Hajdukiewicz on 27th September, 2013, filed in Exotics, Poultry 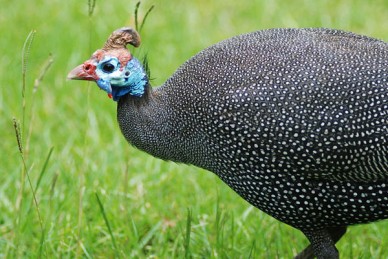 Guinea fowl originate from Africa where there are several wild species including ones that are vulture like in appearance; however, it is the Helmeted Guinea fowl that is domesticated and kept in this country. Within the breed there is a huge range of colours with both solid and pearled (small spots over part or all of the plumage) variations available. The most familiar will be the pearled grey and lavender and the solid white but you can also find variations of brown, buff, blue, ivory and even pied.

They are more closely related to game birds but, as with quail, are commonly grouped with chickens and turkeys and can readily be raised and kept with other poultry breeds.

Guinea fowl are actually very easy to keep and in a free ranging situation are largely self-sufficient. They are excellent foragers and will gain the majority of their nutrients in this way by grazing and feasting on worms, spiders, seeds, beetles and such like. This characteristic has given them a reputation as a good bug control mechanism given that they readily consume ticks and other pests such as lice. That said, if pickings are sparse or if your birds are penned, they will just as happily enjoy a meal of layers pellets, pheasant or turkey rations or grains such as wheat or corn. You will find many reports that say Guinea fowl will almost consciously avoid your vegetable patch. Although partially true (they are less likely to destroy your crops than a flock of rampant chickens) they can still have the occasional peck of your produce or trample your plants in the search of insects.

If free-ranging they will wander much further afield than chickens do and because of this it is worth remembering that they can also fly much higher than a chicken and therefore are less easily constrained by boundaries. Straying on to surrounding land can lead to problems with neighbours.

There are two distinct camps when it comes to housing Guinea fowl. If left to their own devices they will happily spend all year outside, foraging and roosting in trees and indeed many people keep them like this very successfully. However, especially if you have a smaller area, many will keepers advocate providing suitable shelter in the form of a shed or barn and spending some time training them to come back to roost inside for the night. Unlike chickens, this is not instinctive behaviour for Guinea fowl but there are ways of conditioning them, notably with the use of food, that can be effective in setting a night time routine. This will be much easier if you have raised the birds from chicks. They will need a minimum of 2-3 square feet per bird and a suitable perch. Guinea fowl will also prefer a larger entrance than the pop hole you would provide for a chicken coop. If you do need to keep them contained in a run you will need to enclose at least 10m squared for 10-12 birds and you will also need a roof to stop them flying straight out.

If you are moving birds or buying adults they should be kept in a shed for a few weeks after they first arrive on your property so that they settle in and acclimatise to their new surroundings before they are let out. This will give you a good opportunity to start training but, even then some will endeavour to make their own housing arrangements when they are finally allowed to roam.

As is usual in the poultry world squabbles over pecking order can become quite heated. Males can be aggressive and will choose to assert their masculinity whenever they can and with whoever is available. Occasionally an over aggressive male may have to be removed from the group but they are generally good natured and can be naturally quite protective of other birds in a group if danger threatens. However ill-advised it may be, they will also readily face up to attackers especially if they have plenty of backup available. This is not to say that they won’t be taken by predators and you should still take the same precautions as you would with any other birds.

Guinea fowl are quite robust as adult birds and are less susceptible to many of the common ailments associated with other poultry. However, one thing you do need to be cautious of is damp or musty litter which can cause aspergillosis, a respiratory disease caused by a fungus which thrives in these conditions. Bedding should be kept clean and dry at all times.

Eggs, nice if you can find them

Although kept predominantly as a meat bird or pest controllers but they do lay a reasonable amount of eggs during the season which usually runs for about six months from late spring. You can expect 60-100 bantam sized eggs but don’t expect them to make collection easy. While it’s not impossible to get them to use nest boxes, more often than not, they will choose to lay under bushes, in long grass or other well hidden places rather than in designated areas. A good tip, if you do find a hen nesting, is to wait until she has laid quite a few eggs and then start collecting them leaving five or six in the nest each time. Do this while she is away from the nest and it often keeps her laying in the same place all season. It is not unusual for several hens to lay in the same nest and take turns at brooding duties too but, as you will see later, this is where their maternal instincts end.

The eggs are more pointed than those of a chicken. They are similarly proportioned for yolk/white but have thicker shells and although they are higher in protein and somewhat richer than chicken eggs the taste is very similar. 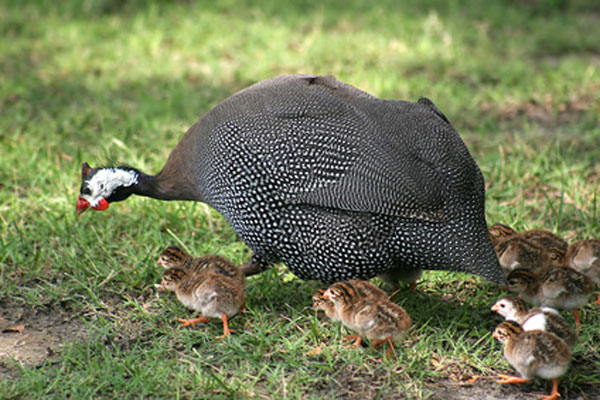 Guinea fowl are famously bad mothers. Hens rarely go broody and even then only after they have deposited a substantial clutch of eggs. If you want to raise young you are far better using a broody hen or incubator to do the job than relying on the natural mother who, even if she does brood a clutch, will take little interest in the young once they are hatched. Incubation time is approximately a week longer than chickens at 26-28 days.

Incubated chicks follow a similar routine to turkeys or pheasants. After drying off in the incubator the young birds, known as keets, are transferred to a brooder lined with kitchen paper for a few days and then to a run with a heat lamp which is gradually raised until they are 6-8 weeks old. At this time they move from chick crumbs to growers pellets until they are around 20 weeks old. Runs will need to be secure – escapees are notoriously difficult to catch – and non-slip to avoid damaging their delicate legs.

It is very important to keep young birds in a damp free environment. As well as the risk of disease mentioned earlier young Guinea fowl are quite frail and damp conditions can easily kill them until they are hardened off. This is another good reason to raise chicks yourself as, in climates like ours, even following mum through dewy grass can kill chicks.

You will find it almost impossible to sex chicks until the start calling at around 8 weeks old. The females have a distinct two note call that sounds like ‘Pot-Rack, Pot-Rack, Pot-Rack’ males have a single note ‘Chi-Chi’. As they get older you can distinguish them visually as the males helmet and wattles will be larger than the females.

If you think cockerels are noisy then you should hear a Guinea fowl settling down for the night. They are extremely vocal especially before roosting and will make an enormous racket if they are disturbed by anything unfamiliar. This makes them extremely good as an early warning system to all manner of intruders, two or four legged, but not perhaps the best of poultry if you have close neighbours. As is the case with some ducks, females are generally noisier than males.

A Guinea fowl will provide proportionally more breast meat for its size and is higher in protein and lower in fat than chicken. A white meat, it is classed as game and does have a mild pheasant like flavour but, in reality, it is more akin to moist turkey meat in texture.

In summary, Guinea fowl will need more room than chickens and, ideally, should be allowed to free range to some extent. They will provide pest control, eggs, early warning system, meat, good feathers for fishing flies and plenty of entertainment if you spend any time watching their antics. Although not suited to everyone, those that do take them on rarely regret it and if you can provide the correct environment and have tolerant (or no) neighbours they make for an easy, versatile and exotic addition to any poultry keepers flock.