Bats: Interview with a vampire

By Mark Hajdukiewicz on 23rd December, 2012, filed in Environment, Wildlife 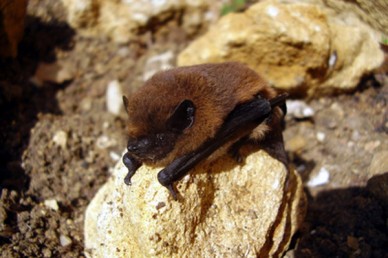 You’re not exactly the sinister razor-toothed fiend I was expecting.
No, we do have this reputation we don’t quite live up to in the flesh and it’s one we certainly don’t deserve.

So tell us a bit about yourself?
Well, I am a Pipistrelle probably the most commonly seen of Hertfordshire’s 10 species of resident bat. I’m about 3.5cm long with a 22cm wingspan. I could fit easily into a matchbox but I get claustrophobic so don’t ask me to prove it.

Are you the smallest bird in Britain?
Bird! Actually I’m a mammal, we have fur and suckle our young, much as any other mammal would, we just have long webbed fingers that make excellent wings. We are the only mammals with the ability for ’true’ flight.

Where do you hang out then, belfries, crypts, graveyards?
Where did you do your research, the Hammer Horror Book of Bat Facts? I used to live in a cosy little tree trunk but I have just moved to a lovely cottage in Datchworth – nice little spot behind the barge boards with a bit more room for the family.

You drink blood though right?
OK I concede that I do have cousins in South America that will endulge in a drop of the red stuff but that is only 3 of nearly 1,000 species! I prefer insects myself… and before you ask I am not blind either.

Ah, but…
I know, don’t ask me where the saying came from . I can see perfectly well thank you –although it is in black and white – and, as I hunt in low light conditions, I have also developed this great little trick called echolocation which allows me to pinpoint my grub in the dark.

How does that work then?
I send out high pitched sounds, mostly beyond the range of human hearing, and as it bounces back from surrounding objects I can build up a picture by comparing the differing amounts of time it takes for the sounds to return.

So what would you normally be doing at this time of year?
Hibernating. I generally sleep from December to February although I’ll occasionally pop out to eat, drink or talk to the media.

Any other interesting bat facts?
We can rotate our eyes 180 degrees so that when we hang upside down we can still see properly.

Really?
Don’t be daft. But seriously, the population of most species of bat is declining and some of us, like the Greater Horseshoe Bat, are among the most endangered animals in Britain.

Why’s that then?
Well the main reasons are, loss of suitable roosting sites, the decline of feeding habitat and the use of pesticides which reduces our food sources. Some timber treatments used in the roofs of the houses where we live are poisonous to bats too.

Blimey, I didn’t realise, can I help?
You can. Local and national bat groups that are doing a tremendous amount, go to www.hmbg.org.uk for more information on how you can help them to help us. It can be as simple as encouraging more night flying insects by planting the right flowers or creating a pond and you could also consider putting up a bat box for us to roost and breed in.

Great thank you for putting me straight on a few things there, I’ll let you get off now… before the sun comes up!