Home » » Environment » Conservation » A rare beauty? Not this lot

A rare beauty? Not this lot

By Mark Hajdukiewicz on 29th July, 2013, filed in Conservation, Environment 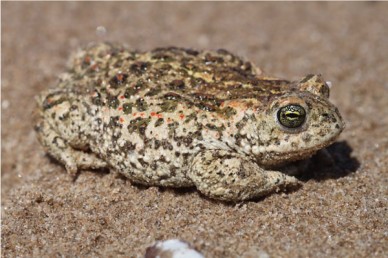 We are all familiar with the current plight of red squirrels, hedgehogs and orchids as they all benefit from high profile and sustained awareness campaigns. This is almost certainly due to the fact that they happen to have been dealt a good hand when it comes to looks and as such have become the cover stars of conservation. However, there are plenty of flora and fauna out there who haven’t had quite the same fortune. While the motley bunch below are certainly rare this lot aren’t going to win any beauty competitions so tend to get left in the wings when it comes to publicity… but not any more, read on to discover why conservation’s not just for the cute and cuddly. 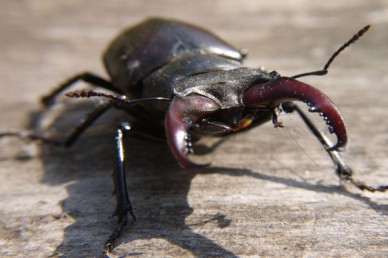 Many years ago I remember seeing these hatch in the late spring, sometimes in their hundreds, but haven’t seen this spectacular event, any beetles or the distinctive larvae, for quite some time now.

The largest beetle found in the UK males can reach a whopping 75mm and have distinctive antlers (hence stag) used for wrestling other males for territory or mating rights. These are not horns at all but enlarged mandibles that are capable of moving, gripping and, yes. biting an unwitting finger. Females are smaller reaching a maximum of about 40mm. Both appear at first glance to be predominantly black but on closer inspection the wing cases are tinged purple/brown with male antlers also a brown colour.

The population has declined drastically over the past 40 years or so and is now predominantly contained in the South-East of the country. It is rare elsewhere and completely absent from some areas.

The stag beetle’s lifecycle is heavily dependent on rotting wood, in fact the larvae spend 3 years growing and developing in rotting logs or the roots of dead or felled trees and it is the loss of this type of environment that is largely to blame for the beetle’s decline. Stag beetle numbers have also been affected by natural predation, especially by members of the crow family and, as is so often the case, as a direct result of human activity.

As we gradually made our gardens, woodlands and public open spaces ever more neat and tidy so the rotten wood and tree stumps disappeared; however, as environmental managers have become more aware of the issues we now see more and more suitable habitat being created as part of ongoing development projects. We can also help by making a log pile in an unused area of our gardens. Partially bury logs to get them rotting more quickly. 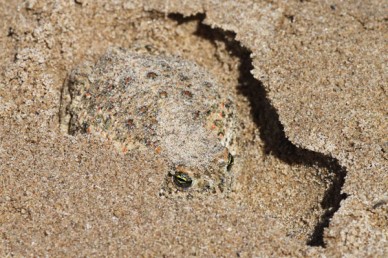 Natterjack toads may be warty but there is something about them that is quite endearing. It has short legs compared to other toads and frogs meaning that instead of the stereotypical hop it walks, or even runs. These short legs also mean that, unusually for an amphibian, it’s not a terribly good swimmer and can even drown in a deep pond if caught without an exit plan. It is identified by a thin but clear yellow line down its back which is present from the time tadpoles grow legs.

Their perfect habitat is one of sandy soil with warm shallow pools and consequently they are only really found on sand dunes and heathlands which, unfortunately, is the reason for their scarcity today. It’s a sad fact that in the last 120 years more than 80 percent of the natterjack’s natural environment has been lost to development, reclamation and afforestation. Their distribution is now mainly restricted to areas in East Anglia, Lincolnshire, Lancashire and Cumbria and although they once had some inland strongholds these populations have now dwindled with the majority now found in coastal area. The species actually became extinct in Wales in the last century but has since been reintroduced.

As if that wasn’t enough, it is also a victim of heavy predation at all stages of its life with adults falling prey to foxes, herons, gulls, terns and otters and tadpoles taken by birds, fish, other amphibians and insect larvae. Perhaps this is why the female can lay up to 7,500 eggs in a season. The natterjack itself has a varied diet of insects, worms, slugs and grubs and catches its prey with a super fast sticky tongue.

They hibernate during winter (November to April), either by digging their own burrow or using one deserted by other animals and birds, emerging in Spring to breed. During the mating season they make a very noisy neighbour with the male’s call audible up to 2 miles away, giving it the dubious honour of being Europe’s loudest amphibian

There are now programmes underway that are reintroducing natterjacks back into areas that once had thriving colonies but only time will tell how successful these prove to be. We have our fingers crossed. 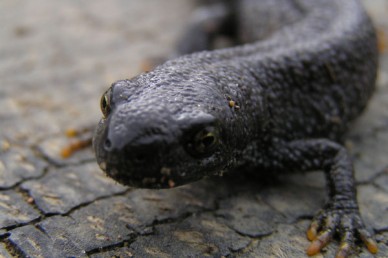 There are three species of newt resident in the UK: common, palmate and great crested. All are widely distributed but the great crested newt is by far the rarest.

They are much larger than the other two species reaching 15cm or more and have black warty skin. They also display a bright orange underbelly with black spots. Males have small white pimples evident on the sides and a white stripe along the length of the tail. During breeding season the male will sport the pronounced dorsal crest from which its name is derived. They have a complex courtship dance that involves thrashing and flicking their tail and standing on its front legs. Tadpoles hatch in the spring and can be distinguished from those of other amphibians by their feathery gills and later by the fact that they develop their back legs first.

All UK newts are protected but great crested newts are subject to additional protection meaning that it is illegal to kill, harm, disturb their habitat, possess or trade in them.

Newts hibernate in winter making a show from about March onwards. Great crested newts will be found in water during the mating season but tend to spend a great deal of the time on the land at other times. They are nocturnal and will spend the days in cool burrows, compost heaps or log piles.

Habitat has become threatened by land development and agricultural expansion. Great crested newts generally favour an area with a large clean open pond with no fish and plenty of vegetation at the boarders where they can lay their eggs. They have a hearty appetite so also need an environment containing plenty of food. They will eat land and aquatic invertebrates such as slugs, snails, worms and insect larvae but will also take tadpoles and even other newts. These requirements mean that garden ponds aren’t generally suitable to sustain a great crested newt colony.

Restoration of suitable habitat is the mainstay of the conservation effort and many areas now have schemes in place to encourage population growth.

Froglife is a charity focused on the conservation of amphibians and reptiles. They have produce an informative guide for the creation and restoration of ponds in farmed landscapes that can be found here. 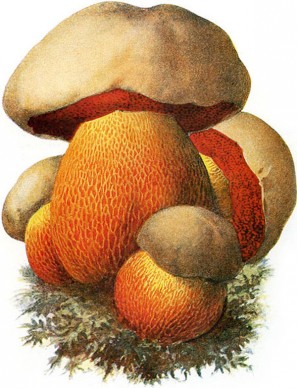 Southern England is the northern most point of this mushroom’s range. Found in areas with chalky soils, usually around oak or beech trees, these bloated looking mushrooms are both poisonous and unpleasant smelling especially when fully grown. The cap is a light buff colour with the bulbous stalk having a pinky-red colour and the underside of the cap is dotted with pores as opposed to the more familiar gills you may expect. The flesh turns blue if bruised or cut.

Due to the nature of fungus it is difficult to tell exactly how rare this mushroom (or any) is as they can produce fruiting bodies quite erratically. However, it is currently thought to be present in only 40 sites in the south of England 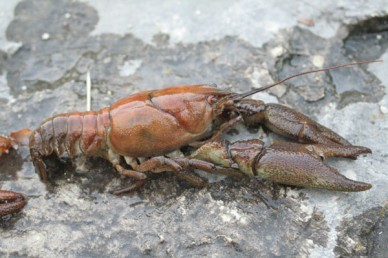 Our only native crayfish and one faced with the real possibility of extinction. The white-clawed crayfish has had to struggle against habitat change and pollution but its fate was sealed when North American signal crayfish, which were originally brought over to farm for food in the 70s, escaped into our waterways. This larger more aggressive cousin from across the pond easily out competes our more timid variety for resources but also carries a fungal disease known as ‘crayfish plague’ to which the white-clawed variety has no natural immunity to.

There are small populations dotted around the UK but most are to be found in central and northern regions of England and West Wales.

There is very little that can be done to help the ailing population especially as controlling the non-native varieties is almost impossible. There are, however, some projects – notably the Avon Wildlife Trust’s white-clawed crayfish conservation project – that are monitoring native and non-native species and have even removed ‘at risk’ populations to ‘ark sites’ where they can be effectively quarantined away from plague carrying species.